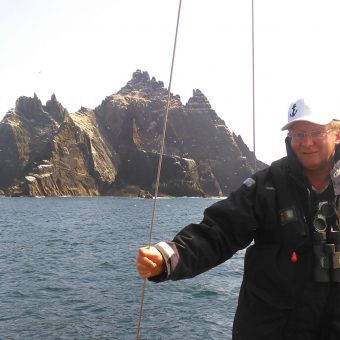 Patrick Hartigan is a Chartered Engineer, and holds a PhD in Satellite Communications, Remote Sensing and Atmospheric Physics.

He has regularly served as a consultant and technical advisor on maritime and related technology to the European Commission and national governments. For a few years, he worked on the Continent and was Head of Masters Education for the European Institute of Innovation and Technology (EIT). He was also President of a marine trade association, based in France.

A start-up company, Nowcasting International, which Patrick founded in County Clare in 1995, grew to be one the world leaders in metocean forecasting for the offshore and maritime industries. Its weather forecasts are still in regular use by seafarers in Ireland and elsewhere.

Patrick’s seafaring qualifications were partly acquired during his twelve years’ experience as an Irish Coast Guard volunteer. He has skippered and crewed on 30’–70’ cruising yachts in the North Atlantic, Arctic Ocean, Barents Sea, White Sea, Mediterranean and off the West African coast.  He lives on the edge of the Atlantic and enjoys nothing more than being captain of Celtic Mist, leading a crew of IWDG members to wherever the whales and dolphins can be found.