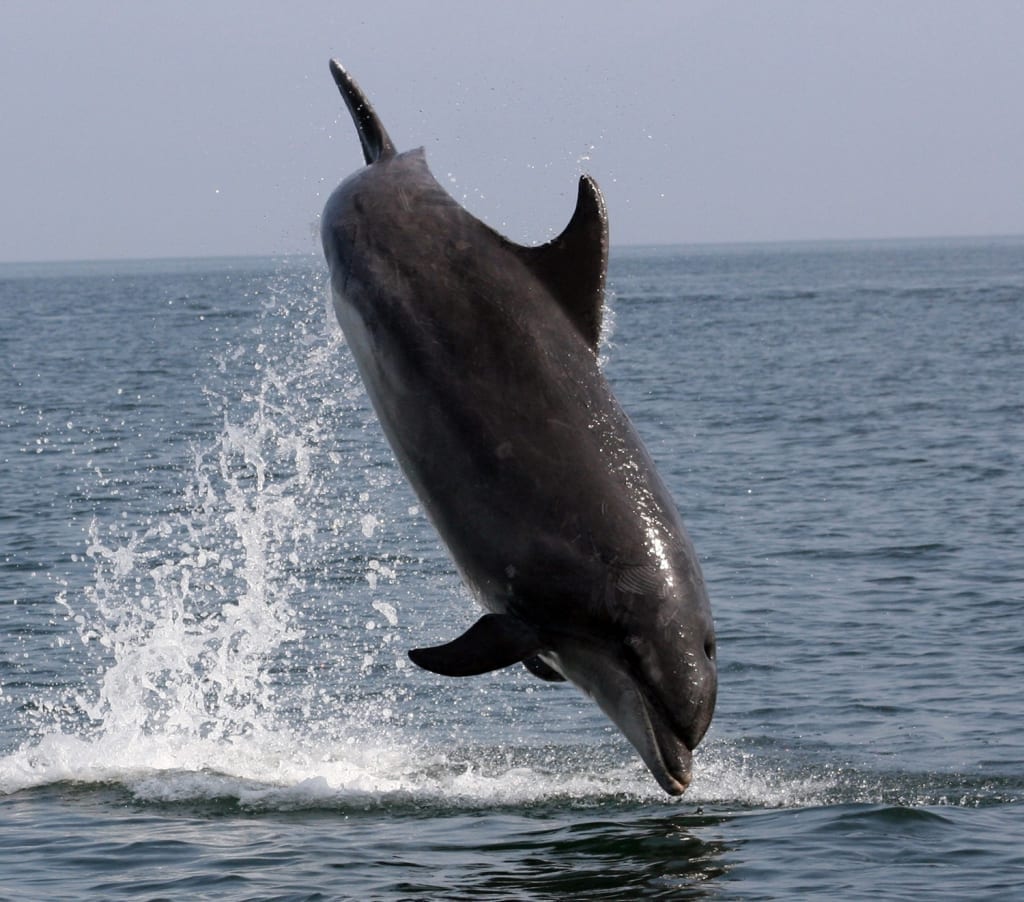 Citizen Science has been recognised over the past few decades as an important medium between scientists and the public, and has been used as a cost-effective tool to collect data through broad-scale surveys. With its ability to increase the quantity and spatial extent of cetacean observations, it has been considered as vital for marine mammal research by giving a valuable insight in predicting their distribution and abundance. This is particularly useful for species protected under the Annex II of the Habitats Directive, as understanding their distribution is a requirement in the designation of Marine Protected Areas (MPAs) in order to protect important habitats.

Although the concept of citizen science is attractive for cetacean research, this method is mainly paired with non-systematic surveying, which is defined by a lack of sampling effort recorded. Thus the lack of effort can only give information on where an animal was seen, in contrary of where it was absent. The data collected from citizen science can thus limit our chances of performing precise and accurate analysis when modelling their distribution. 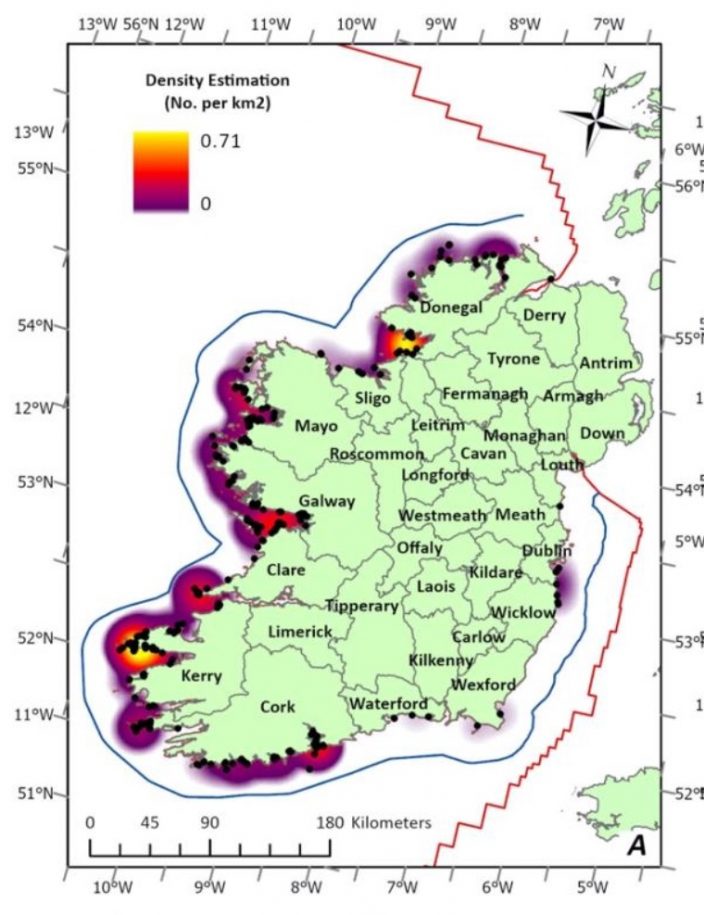 So how can we use citizen science as an asset to contribute to our knowledge of cetacean distribution?

My project aimed at assessing the use of non-systematic surveying and citizen science as a cost-effective tool to inform marine spatial conservation planning, using a 20-year dataset of bottlenose dolphin (Tursiops truncatus) casual (non-effort) sightings in Irish coastal waters collected and maintained by the IWDG. Predictions of their seasonal distribution were explored using MaxEnt software in order to identify potential hotspots for the species. The choice of such modelling software was made due to its ability to use presence-only records, unlike more common modelling techniques requiring sighting records with associated effort. Maxent uses not only presence records but also their associated environmental features such as distance to shore, seabed slope, sea temperature and water depth, in order to find the most uniform distribution under a set of constraints from incomplete knowledge[i],[ii]. In other words, this type of software is very valuable to identify important habitats for marine mammals, especially in coastal areas where conflicts between these species and human activity is at its highest.

Although variation between seasons occurred, the results of my project identified two strong core use areas off the southwest coast of Co. Donegal and off the northwest coast of Co. Kerry (Brandon and Tralee Bays). These findings correlated with the results of the ObSERVE aerial surveys of 2015-2017 suggesting that citizen science can be a valuable tool to understand and predict distribution and abundance of bottlenose dolphins in Irish waters.

So do these results reflect the true distribution of bottlenose dolphins along the coast of Ireland?

Although this modelling software (in principle) fixes the limitations of non-systematic surveying and the results of my project were conclusive, such methods can still overestimate, or underestimate, the true distribution and abundance of a species. This means that it is important to take these biases into account when analysing such data in population trend assessments, while also comparing the results of non-systematic surveys with effort-based population and abundance surveys[iii]

What are the main concerns of protecting bottlenose dolphins in Ireland?

To date, Ireland has not yet defined what the term Marine Protected Area (MPA) means, and with the country committing to protect 30% of its marine waters by 2030, the IWDG have been looking at creating a new network of protected areas called Marine Conservation Zones (MCZs)[iv]. Unlike Special Areas of Conservation (SACs), these protected areas would be defined at the national level and based on (based on not only the United Kingdom’s approach (where they originated from), but also on international case studies to ensure coherence throughout the process.

With Member States, including Ireland, still requested to establish site specific Conservation Objectives and Management Plans for SACs, the current designated SACs in Ireland are reflective of government  mismanagement to adhere to EU laws. Pressure to designate SACs in a short amount of time, resulted in “paper-park” designations without any management implementation[v]. This was mainly due to many challenges involving law enforcement, lack of funding, or even the need for political pressure to connect to scientific knowledge in terms of conservation management. 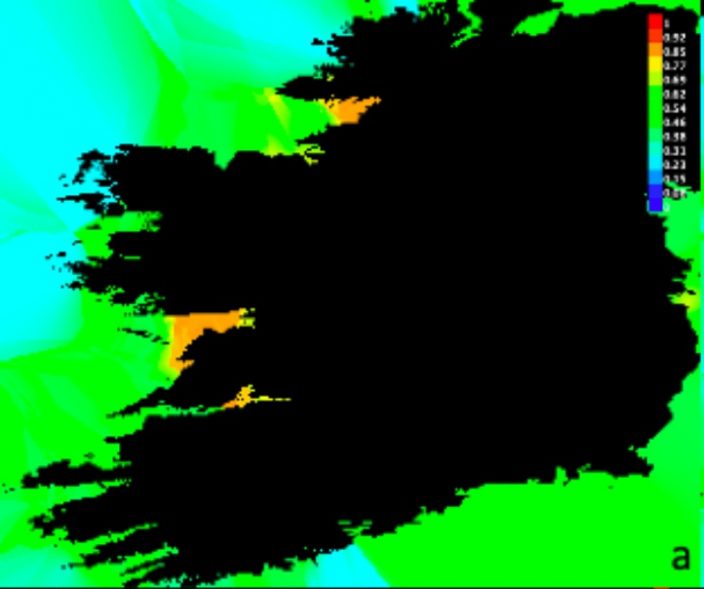 The Marine Strategy Framework Directive (MSFD) have recently developed policy to use coastal bottlenose dolphins as “abundance indicators” of Environmental Status. However the baseline presented by the EU relevant to the MSFD Biodiversity Indicator, presents large-scale multinational surveys such as CODA and SCANS as the most useful to assess population trends in bottlenose dolphins[vi]. This is mainly due to short time series of data becoming misleading, thus the need for time series covering at least 10 years, with a minimum of four counts during that periodvi. Pressure is increasing to integrate planning and management[vii]. Citizen science could therefore be highly beneficial to extend our knowledge on cetacean spatial distribution, in order to provide robust scientific management advice, by presenting it as complementary data to large-scale surveys. By combining citizen science with ongoing effort-based research, Ireland could potentially reach its environmental objectives in accordance with the EU Biodiversity Strategy and increase the overall protection of marine mammals in Irish waters.

This project was her final year thesis on the Applied Freshwater and Marine Biology degree at the Galway-Mayo Institute of Technology. Her project “Assessing the use of long-term coastal off-hand si

ghting data and spatial modelling of seasonal bottlenose dolphin (Tursiops truncatus) distribution to inform of future conservation zones in Irish waters” nominated for the 2021 Level 8 Undergraduate of the Year by the Environmental Science Association of Ireland ESAI. Data for her project was supplied by the IWDG.