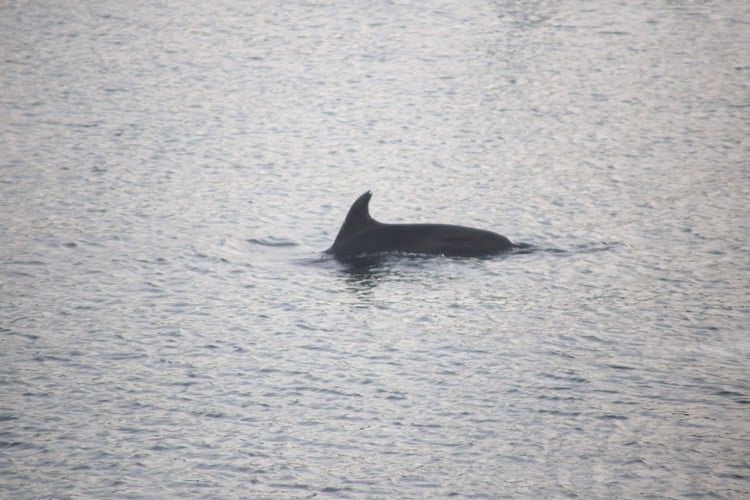 On the 22nd August, a lone bottlenose dolphin known as ‘Nick’ caused a stir after being filmed interacting boisterously with swimmers in Hayle harbour, Cornwall, UK. At the time, marine conservation groups British Divers Marine Life Rescue and Marine Connection warned of the dangers to both the dolphin and humans, as these ‘solitary social’ dolphins have been known to injure people, as well as being injured and killed by boat strikes themselves. The most recent of these was known as ‘Danny’ the dolphin in Dorset, who was struck and died instantly in December 2020, and has since had a statue erected in his memory by the local community. 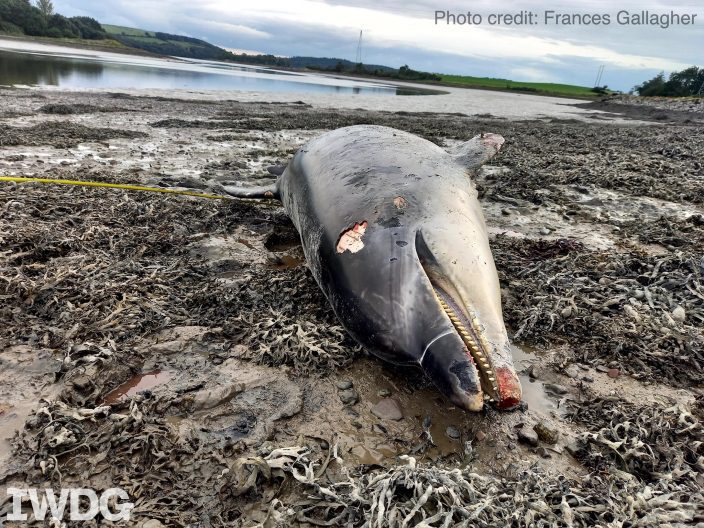 ‘Nick’ was first identified at the Isles of Scilly in June 2020, and was then sighted in Co. Cork, Waterford and Wexford in Ireland between April and July 2021. On the 1st August he was back in Scilly and made occasional trips to Cornwall, visiting the Helford estuary, Mount’s Bay and St Ives Bay. He was often spotted interacting closely with boats and occasionally with swimmers too. During this time, he was reported a number of times to rescue organisations as a healed scar on his beak was frequently misidentified as being plastic caught around his beak, though the scar itself may well have been caused by entanglement some time earlier in his life. He was never seen again after the incident in Hayle on 22nd August.
Sadly, on 12th September, a bottlenose dolphin carcass was reported to the Irish Whale and Dolphin Group’s Strandings Scheme from Roches Point in Cork Harbour. Frances Gallagher, a Stranding Network Volunteer with group, visited the animal to collect detailed images and was able to confirm that it was an adult male measuring 2.6m and in good nutritional condition. IWDG Strandings Officer Stephanie Levesque and IWDG researcher Mags Daly reported “the images showed multiple, deep lacerations on the carcass located on the dorsal surface of the tail stock and tail fluke – injuries consistent with propeller damage. Had the injuries occurred post mortem, we would expect to see them on the underside of the carcass, rather than the top of the tail stock.”
These photos provided the evidence needed to confirm that this was indeed the solitary dolphin known as ‘Nick’ based on the distinctive scar on his beak and the unique markings on his dorsal fin.
‘Social solitary’ dolphins are a highly unusual circumstance where an individual chooses to interact primarily with people and watercraft over living with other dolphins. They often display behaviours such as following boats, spending time inside harbours, and even coming amongst swimmers, which can understandably elicit a lot of excitement from observers. IWDG, along with BDMLR and Marine Connection, are now keen to spotlight the great danger faced by these unique dolphins when they turn up, due to their higher vulnerability to accidents.
Liz Sandeman, who leads the Marine Connection’s social solitary dolphin project said “We urge the public to follow strict guidance when in an area that a solitary/social dolphin is known to frequent. People should not to attempt to interact with the marine mammal, as this causes habituation and as we have stressed repeatedly in this type of situation, causes the dolphin to lose its’ natural wariness around humans and boat traffic and often, as in this case, leads to its demise.”
Dan Jarvis, BDMLR’s Area Coordinator for Cornwall and the Isles of Scilly added “’Nick’s’ death so soon after he became prolific a few short weeks ago just goes to show that there is still a lot of work to be done in raising awareness to the public of how to act around wildlife. Although he will inevitably become just another statistic and case study, we can at least use what has happened to him right now to help get more people to understand why it is important that they listen to the continual messaging organisations like ourselves put out for following a proper code of conduct for wildlife interactions and stop this happening repeatedly, leaving us to pick up the pieces.”
More information about social solitary cetaceans can be found at www.marineconnection.org/social-solitary-cetaceans.
Photos: Frances Gallagher/IWDG and Constance Morris/Cornish Coast Photography.