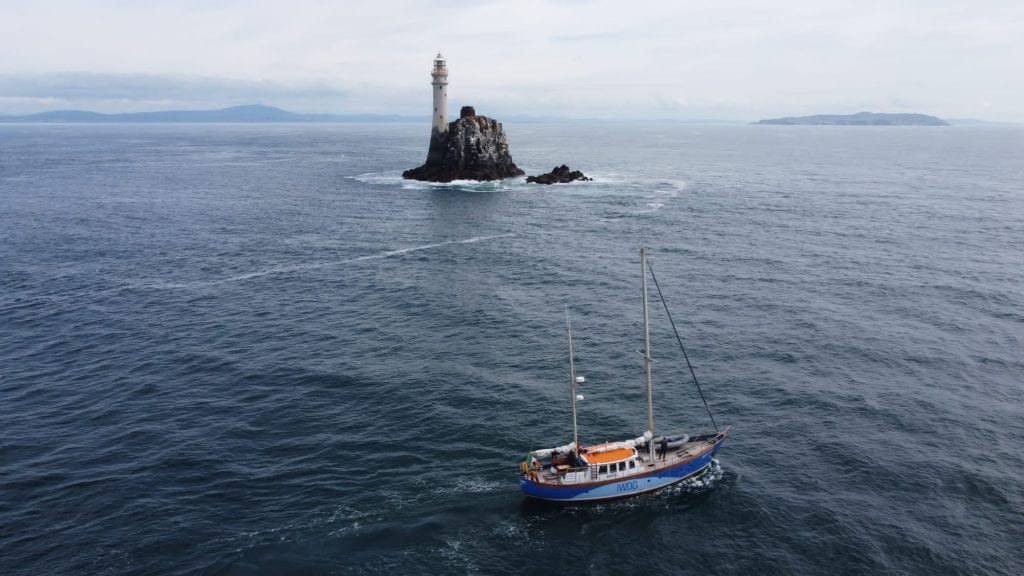 Our journey began in Crosshaven, Co. Cork, where we met our fantastic crew – skipper Noel, first mate Pat, IWDG members Susan, Tony, Robbie, and Daniel, and marine biologists Sorcha and Li-ann.  The crew clicked instantly, we knew we were in for a whale of a time and it wasn’t a fluke!  First order of business was a trip to the shop to stock up on necessities for the week. Once that was out of the way our skipper gave us the safety briefing, outlined the passage plan and the duties involved in sailing for the week. We sat down to a nice meal and went to bed dreaming of our voyage ahead. 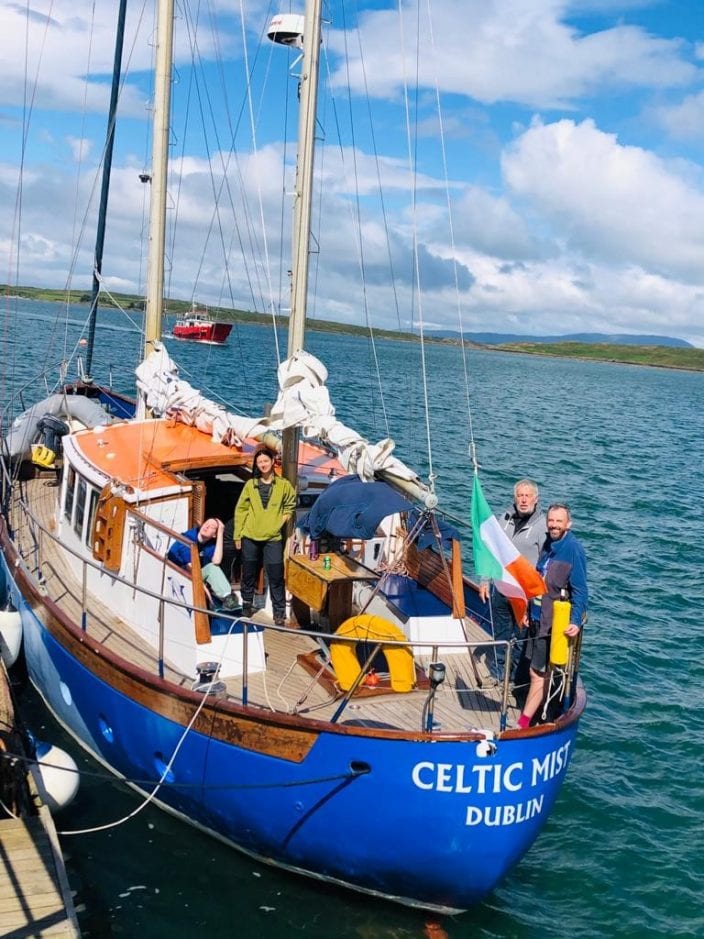 We set off early on Monday morning as we had a long journey to our next destination, Glandore. Upon leaving Cork harbour Sorcha and Li-ann recorded the environmental conditions. As it was our first day the crew were just getting their sea legs and we were all feeling a bit queasy! It was a loooooong 9 hours! We soon realized that the cure to sea sickness is SIGHTINGS! Our first sighting was just off the Old Head of Kinsale, Sorcha spotted a large blow in the distance which we made sure to record in our data collection software – Logger. We made our way safely toward the animal and discovered it was a fin whale. Not only one, but two whales! We couldn’t believe it, our first sighting and it was the second largest whale species in the world! The encounter lasted about half an hour, and they surfaced right beside us, we could even hear their blows! 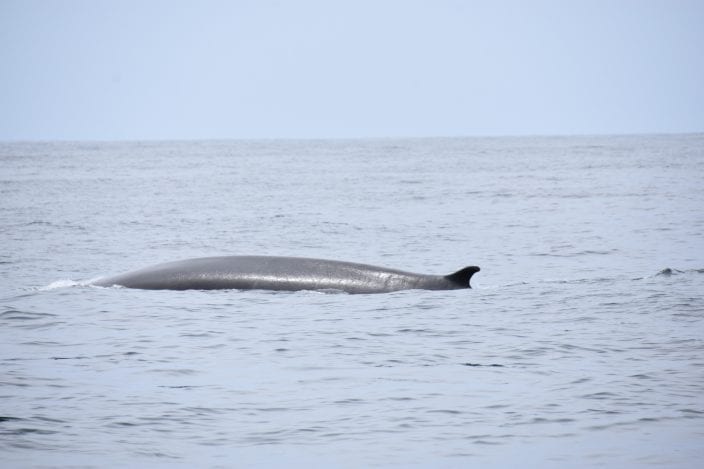 Not long after, we had our second sighting – a juvenile minke whale. The highlight of our first day had to be our third sighting. A curious minke that hung around for twenty minutes, swimming in under Celtic Mist a number of times and surfacing right beside us! Close enough to understand why they’re affectionately known as Stinky Minkes! We arrived in Glandore and were treated to a gourmet feast by the first pair on cooking duty, Tony and Daniel. A great way to end our whale-filled first day. 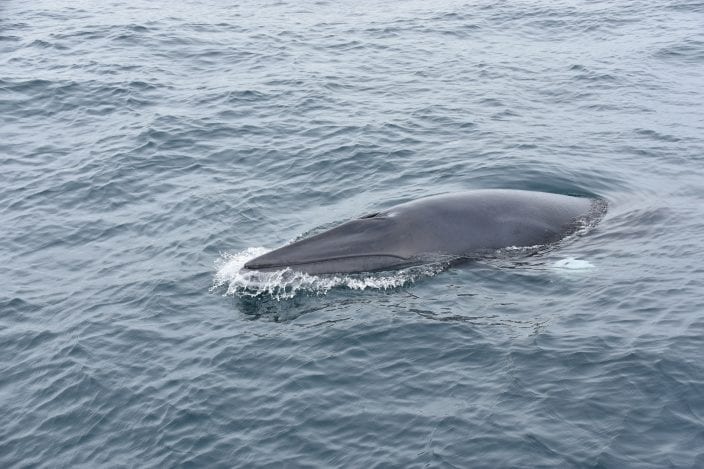 The curious minke whale that swam around the boat for 20 minutes. Image by Li-Ann Small/IWDG

We set off from Glandore to Baltimore. The sea state was less than ideal with a large swell. However, we had learned our lesson from the previous day and took our sea sickness tablets! Life changing! Unfortunately, due to poor sea conditions we had no sightings. We still made the most of our time on the Atlantic. The more experienced crew members helped the marine biologists learn valuable sailing skills like rope knots, putting up the sails and using fenders safely. The rain held off, so we enjoyed our second day just appreciating the journey to our next destination. When we landed in Baltimore, we decided to go for a sociable pint on land in Bushe’s bar. Li-ann and Sorcha were on dinner duty and much to their surprise everyone enjoyed it immensely! 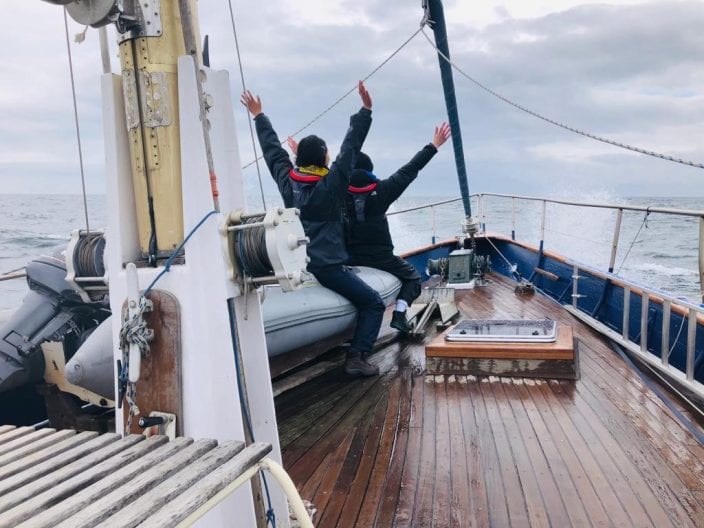 Wednesday morning, we refueled and set sail for Castletownsend. We sailed out of Roaring Water Bay, past Cape Clear Island and around Fastnet Rock. The weather was incredible! We spotted multiple sunfish flapping their fins on the surface of the water, looking as confused as we were! Sunfish lack a tail fin and use their dorsal and anal fins to move making it look unusual hanging around the surface. What an awkward fish!  There were also lots of puffins sitting and diving all around us. We arrived in Castletownsend and anchored. After dinner, two of the crew decided to take a short dip in the balmy waters of the harbour. What a way to conclude an amazing day! 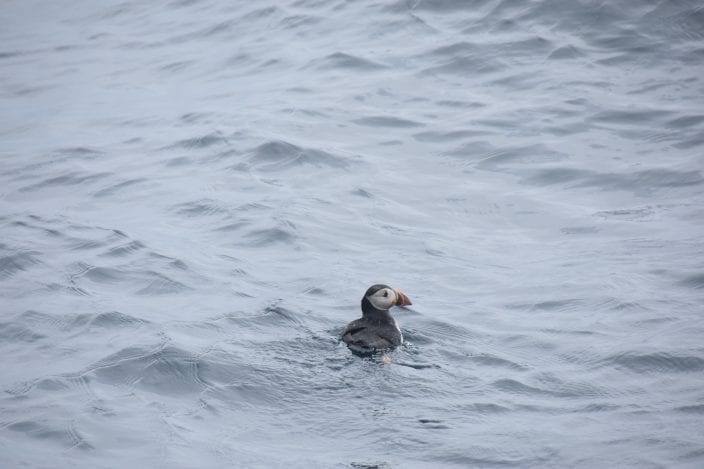 Puffins hanging out together on the surface of the water. Image by Li-Ann Small/IWDG

We left Castletownsend for Kinsale. We had our first experience of dolphins bow riding – 4 common dolphins swam with the boat for several minutes, breaching and twirling in the water. Everyone was thoroughly entertained by their mesmerizing acrobatics!  The sea was calm making it easier to spot marine mammals. The highlight of the trip was spotting a Humpback whale off Galley Head that appeared to be travelling with two fin whales! Their blows were very distinctive, tall and bushy! We followed them while also maintaining a safe distance so as not to disturb them. The humpback fluked, showing the underside of his tail as he was diving. We took photos of the tail and dorsal fins, which was distinctively marked, allowing us to identify him as HBIRL3 or “Boomerang”. This whale has been sighted in Irish waters since 2001, and our encounter was the 57th to date! Our day finished in Kinsale, with a delicious birthday meal for our first mate Pat! Happy birthday! 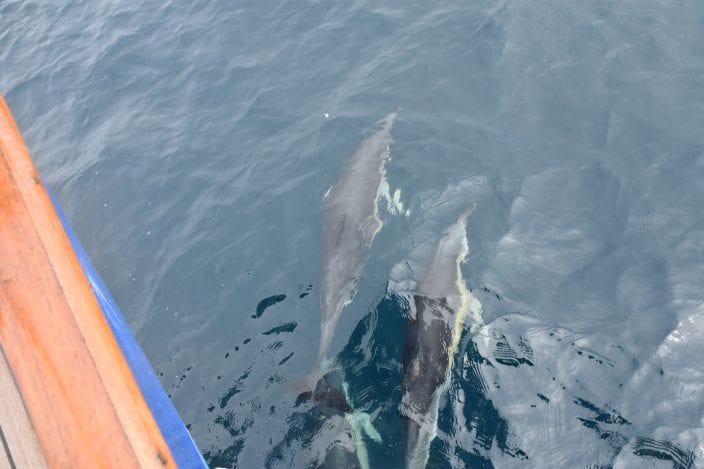 Initial cues that suggested that we were watching a humpback (large blow and tail fluke). Image by Sorcha McGuire/IWDG 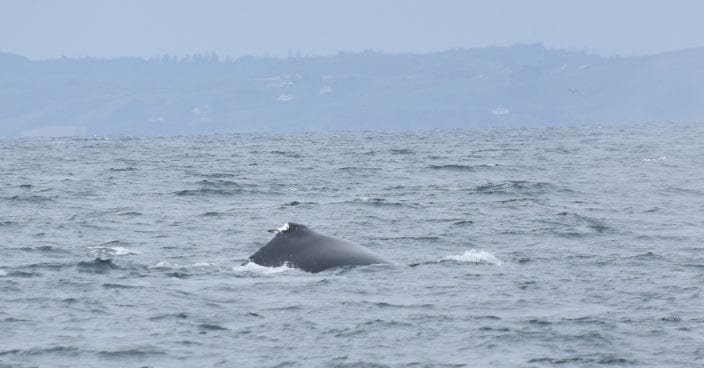 The injured dorsal fin that allowed IWDG to identify this humpback whale as HBIRL3 “Boomerang”. Image by Sorcha McGuire/IWDG

The last day of our trip was spent exploring Kinsale town, hearing local history from one of our crew members, a Cork native! The weather was less than ideal, more of a day for ducks than a day for whales! We left Kinsale for Crosshaven on the final leg of our voyage. There was a large swell and heavy mist, making it difficult to spot any animals. It was a short journey back to Cork harbour, with many jellyfish along the way. We went for a freezing cold swim in a local swimming spot – Graball Bay. It was there we had our final sighting of the trip, a grey seal a short distance from the shore. It was a great way to seal our adventure! 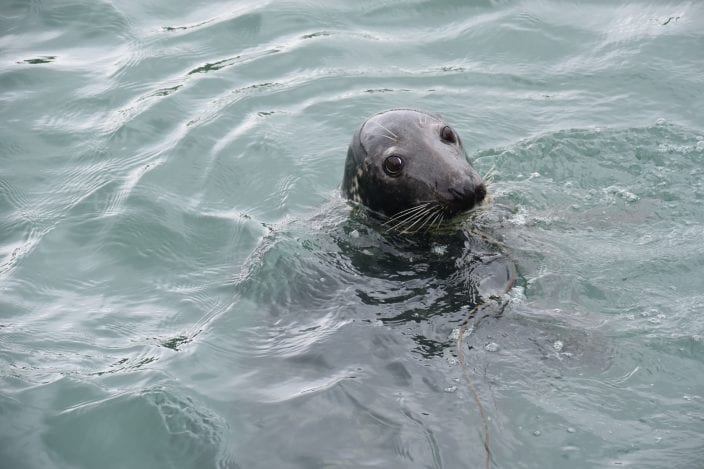 Saturday was spent giving Celtic Mist a good scrub-down. We sadly said our farewells to our wonderful crew members, after a fantastic week of cetaceans, craic, agus ceol! Until the next adventure 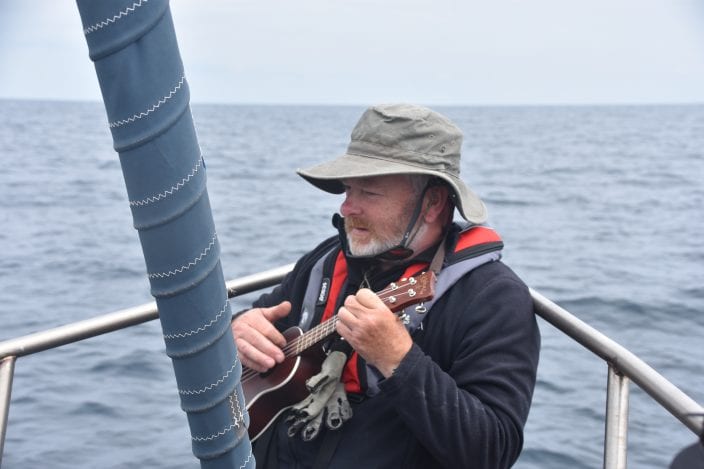 Skipper Noel entertaining us with ceol on the ukulele.