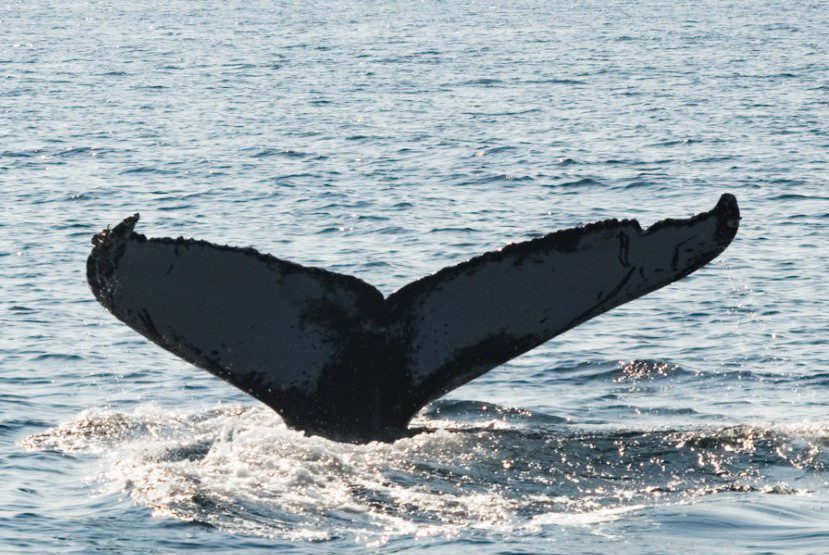 We’ve had many great Humpback days in IWDG, but August 29th 2021 will stand out as a particularly memorable one.

It started out as it so often does with an observer watching up on a cliff top and this person was Nick Massett up on Slea Head, Co. Kerry, who along with Jimmy Flannery of Dingle Sea Safari, located and identified #HBIRL107 just south of Crow Rock.  Shortly afterwards Eoin Delaney while sea kayaking off Carraroe, Conamara, videod a humpback feeding in among common dolphins and while we can’t get a positive ID on this individual, any humpback sighting record from Galway Bay is an important event. Around 15:30 skipper Colin Barnes of Cork Whale Watch, on his second trip of the day photographed a 3rd humpback breaching so close to the cliffs at Scullane Point, near Toe Head that he was concerned it would injure itself!  At the time, he felt it was an animal he’d not seen before and he was right, as the fluke shots he and local IWDG member Conor Rowlands obtained, confirm this to be a new humpback not previously recorded in any Irish waters. This animal has been allocated to the Irish Humpback Whale ID catalogue as #HBIRL113.

While all this was going on between Counties Cork, Kerry and Galway, some 265 km to the southeast a birding pelagic trip was taking place off the Scilly Isles on the southwestern most tip of the UK and the highlight of the trip was an encounter with an obliging humpback whale, who tail fluked nicely, and these images were forwarded soon afterwards by colleagues in the UK and when matched they reveal this individual to be #HBIRL77.  IWDG has documented this whale on each of the last 6 years in the Irish Southwest and west coast.  It was first photographed off the Aran Islands, Co. Galway in August 2016, and we’ve had 17 confirmed encounters with it since, the most recent of which was June 13th this year off the Blaskets, Co. Kerry.  This is our first international match for this individual and our second match now of an “Irish” humpback to the Scilly’s, England.  Clearly an important stop over for both our humpbacks and at least one wayward Walrus.

These encounters and re-sightings are important, as they help IWDG build a more complete picture that reveals how these humpbacks are using Irish and adjacent waters.  If fortunate enough to have an encounter with this most charasmatic of our whales, please try to get a photograph (better than video) of the ventral surface of their tail fluke, as this is the most effective way to confirm their identity.  Any sightings and images should be reported to IWDG and images can be attached to the report or emailed to IWDG Sightings Officer seperately on sightings@iwdg.ie.  The IWDG has curated this powerful resource since 1999 and a sample of all known humpback fluke images is available on www.iwdg.ie to make it easy for people to match their images

Graphic below shows these 4 sightings mapped……perhaps you also saw a humpback whale in another area or county?  Is so, we’d love to hear from you.  Thanks to Eoin Delaney, Nick Massett, Jimmy Flannery/Dingle Sea Safari, Cork Whale Watch, Conor Rowlands, Carl Chapman/SWF UK, Joe Pender & Bob Flood for helping us tell this remarkable tale of a significant day for humpback whales. 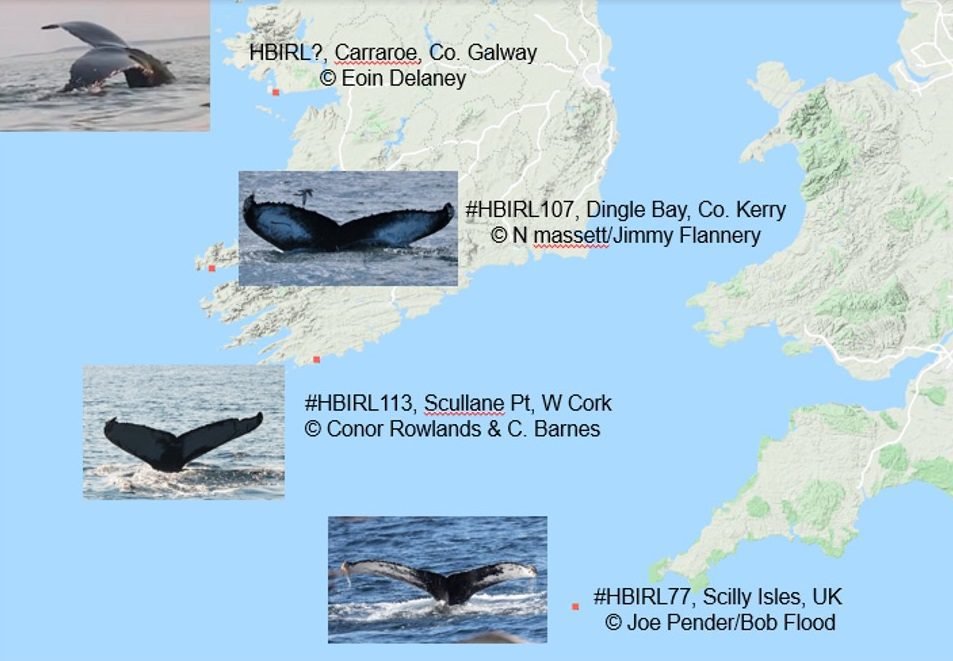