It was January, 1988. We were bobbing in a cold, murky sea, rain hitting my diving mask at 45 degrees. We had been floating there for what seemed ages when poof, a large grey mound of blubber surfaced right next to us, out of nowhere. The dolphin repeated this three times then was gone. It was my first encounter with Fungie.

I had only been in Ireland four months, having arrived at UCC to do my PhD, when I was introduced to an oceanographer and fellow diver, Brian Holmes. Over the next few years, I occasionally travelled to Dingle with Brian and Sheila Stokes, two of the very first people to swim regularly with Fungie. Brian brought a small inflatable on the back of his Hilux and parked up next to the lighthouse where Paddy Ferriter lived. I can’t say I remember any great sessions in the water with Fungie and if truth be told he seemed to prefer swimming with Sheila with myself and Brian driving the boat around the mouth of the harbour. But this was Dingle a busy fishing town in west Kerry, and here was I hanging out with a wild dolphin, in the wild west of Ireland ! 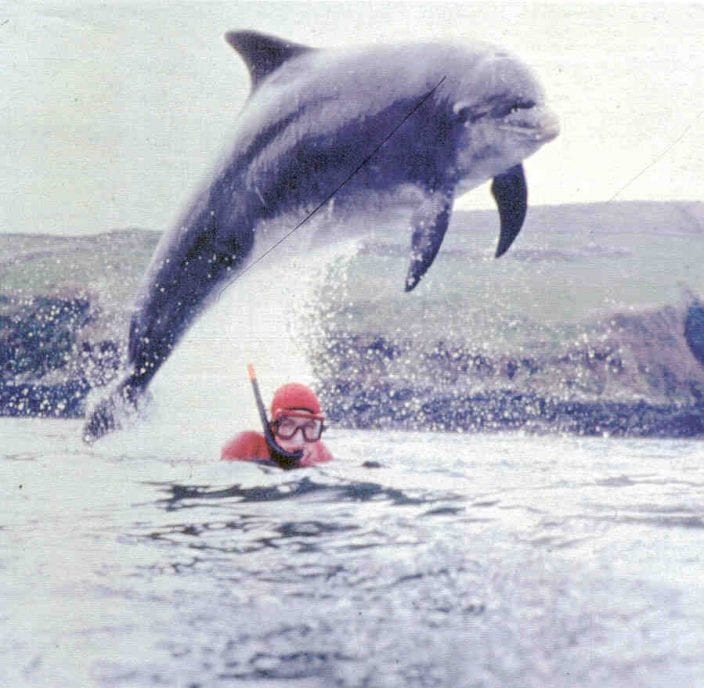 In 1990 we formed the Irish Whale and Dolphin Group, a group of people interested in whales and dolphins in Ireland ! It was around this time that word about the Dingle Dolphin was spreading, indeed I think to most people Fungie was the ONLY dolphin in Ireland. A few locals were taking people out to see him, retired fishermen on old wooden boats. Two local divers, Ronnie Fitzgibbon and John O’Connor, were always helpful to fellow divers and Ronnie went on to publish the first book on the “The Dingle Dolphin” in 1988. But it was the publishing in 1991 of “Falling for a Dolphin” by Heathcote Williams, who had recently found international fame for his poem “Whale Nation”, which launched Fungie into international stardom. People were now flocking to Dingle from all over Europe to swim, hang out and sometimes “worship” Fungie. I remember tepees pitched next to Paddy’s lighthouse full of Germans, Dutch and English all praying to the Dingle Dolphin at dawn, straining to understand the dolphins message from the deep.

One morning a young girl was playing a whistle on the small cliff near Béan Bán. As myself and Brian motored in on the inflatable she rushed down “did Fungi enjoy my playing?”  She had read that Fungie loved to hear music and had come all the way to Dingle to play him some tunes. “Well I don’t know” said Brian. “I’m not sure he can hear you, his heads’ stuck under the water”. After seeing her obvious disappointment Brian added “but I enjoyed it a lot, so let’s not worry too much about what the dolphin thought”. 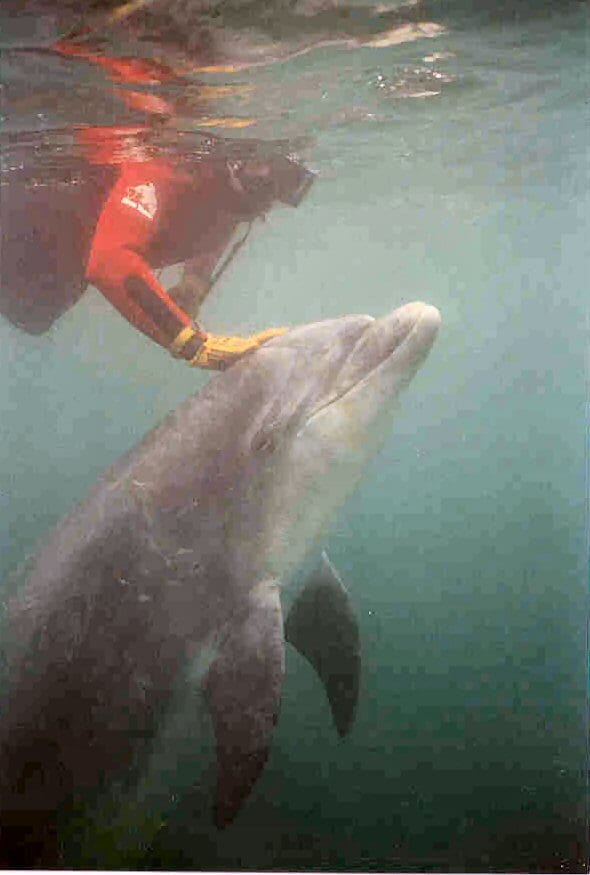 It was during this period that dolphin tourism boomed, but for a short while it was getting messy with visitors being harassed on the streets in Dingle to take a “dolphin trip”. Following some bad publicity, the Dingle Boatmen’s Association was established and the industry became much better organised. Since then seeing Fungie was not only the highlight of many a person’s visit to Dingle but it became a major factor for tourists to visit not only Dingle or County Kerry but to visit Ireland. Such was his international fame and draw.

There have been many “friendly” dolphins socialising with humans worldwide. One summer in Ireland we had four different bottlenose dolphins between Dingle and Donegal, hanging out with humans;  Fungie, Dony the Dunquin Dolphin, Sandy on Inis Óirr and Dougie on Tory Island. What was going on ? These other dolphins left, but Fungie remained and up to last week was officially the longest living “friendly” dolphin in the world. Remarkable.

However, building an international tourism product on a single dolphin was never going to last. It was unsustainable. There were attempts to spread marine ecotourism out from Dingle to other areas of Dingle Bay and the Blasket Islands, but it was almost too easy with Fungie. He was rarely not to be found in the mouth of Dingle Harbour and rarely did not perform.

In 1988 when I first visited the Dingle Dolphin, he looked like an old adult male even then, with plenty of white scarring around his beak (nose). Bottlenose dolphins are thought to live between 30 and 50 years, with females living longer than males. So the clock was most definitely ticking for Fungie. 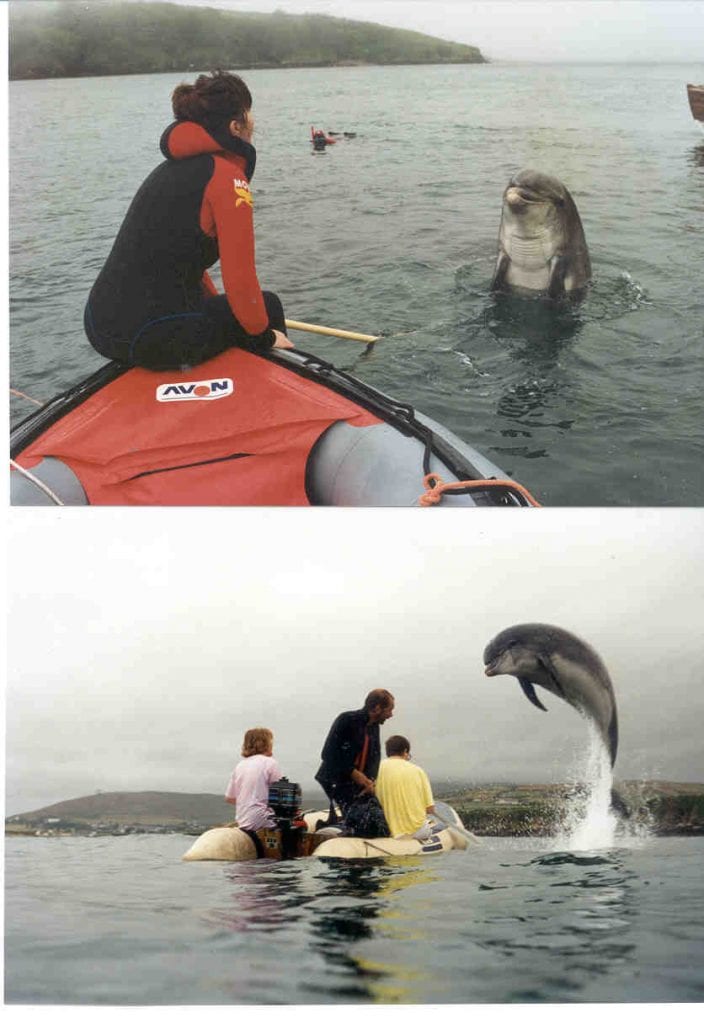 If Fungie really is gone, this was always the way it was going to be. Bottlenose dolphins, despite being widespread and abundant off the west coast of Ireland, don’t strand that often. In over 25 years of studying the resident bottlenose dolphins in the Shannon Estuary I have known of only 3 or 4 individuals washed up dead. Why is this ? Do they swim offshore to die ? or sink ? or is there really a “dolphin graveyard” where bottlenose go to die ?

It’s better this way, rather than Fungie wash up dead on the shores of Dingle Bay, just disappear. Leave people guessing, and hoping. No doubt, there will be regular sightings of Fungi like there is of Elvis or Shergar. Only time will tell if his tenure in Dingle is over, but as the time without a sighting increases, then the likelihood that the world’s most famous dolphin is dead, is more likely. Millions of people have seen Fungie, we hope for many this started a life-long interest in dolphins and the marine environment and that his legacy will live on for years through them.

Dr Simon Berrow is CEO of the Irish Whale and Dolphin Group and a lecturer at the Galway-Mayo Institute of Technology on the Applied Aquatic and Marine Biology degree.