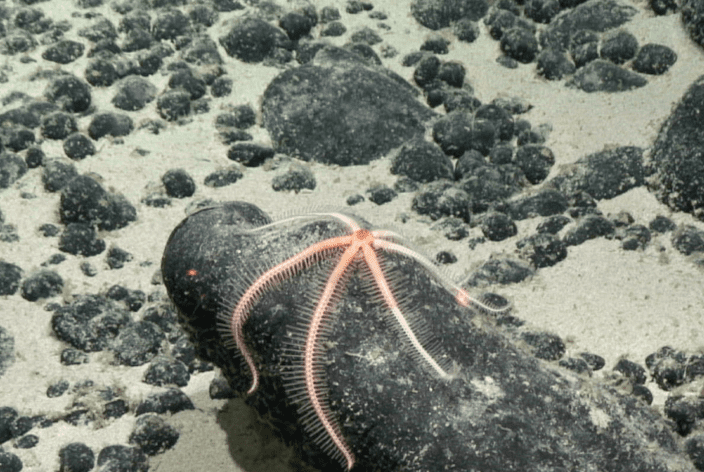 The deep-sea floor is rich with minerals required for a more environmentally sustainable future. But at what cost? The potential catastrophic impact of mining operations on the deep-sea environment is undeniable. These are habitats currently largely unexplored by man and far removed from all human settlements, and therefore difficult for many people to appreciate what impacts DSM might have on these marine habitats and resources.

Our Comprehensive review we taker a dive into the deep and identifies the impacts of deep sea mining on the marine environment, looking specifically at the issues which could affect cetaceans. 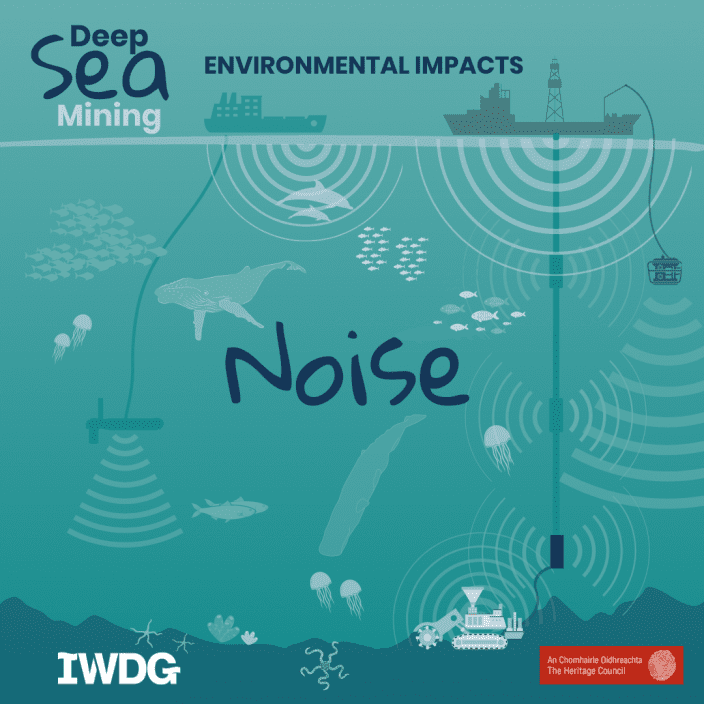 Noise will be introduced from the surface to the seabed during all phases of the deep sea mining (DSM) process. This could have far reaching effects on the marine environment. Potential elevated noise comes from a variety of sources, ranging from mining equipment to pumps and thrusters, to a range of acoustic geophysical and undersea communication equipment.

Anthropogenic noise may exclude some species of cetacean and other species of unstudied marine life from large areas of the deep sea where light is excluded, and sound becomes the primary sense involved in feeding and social or reproductive communication. Cetaceans are particularly vulnerable to noise pollution, having adapted to use hearing as their main sense. Increased anthropogenic noise can have a number of negative impacts on cetaceans including physical injury, physiological responses, behavioural disruption, and communication masking. Increased noise from DSM could cause physical injury, disrupt behaviour and impair communication, as well as affect the species that they feed on. 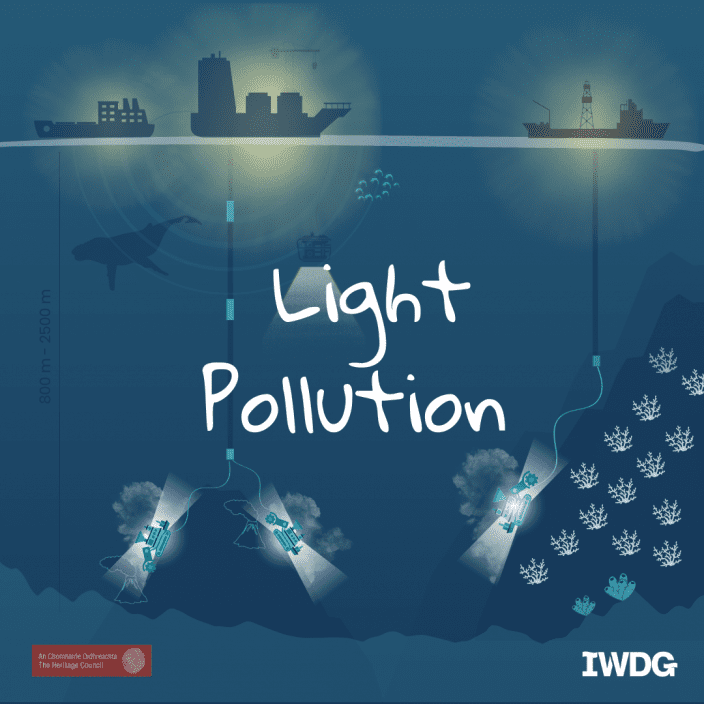 Light pollution from surface vessels involved in DSM will become a long-term feature in an otherwise dark ocean far from land. On the ocean floor mining operations will introduce bright light in an environment that has never seen this before, with unknown environmental impacts.

he impact on cetaceans of bright lights has not been studied. There is also currently no information available on whether deep diving cetaceans will be directly impacted by light pollution or indirectly through light impacts on prey at depth or at the surface. 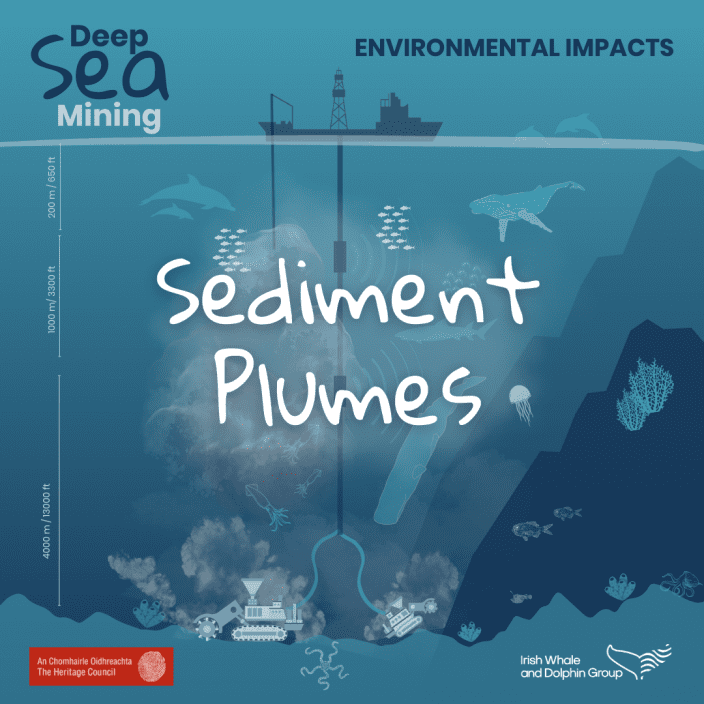 Two types of plumes will be created during DSM. Clouds of sediment will be stirred up at the mining sites by vehicles dredging and collecting the mined resources. These plumes could spread and bury deep-sea habitats. Waste water will also be discharged back into the water column after the minerals are extracted at the surface. This will create sediment plumes which may take a long time to settle, spreading and polluting large swaths of the ocean.

The deep ocean accumulates pollutants over many decades. Dredging sediment on the seabed may release and re-suspend many dangerous chemicals and compounds, which will then bioaccumulate, contaminating the food chain 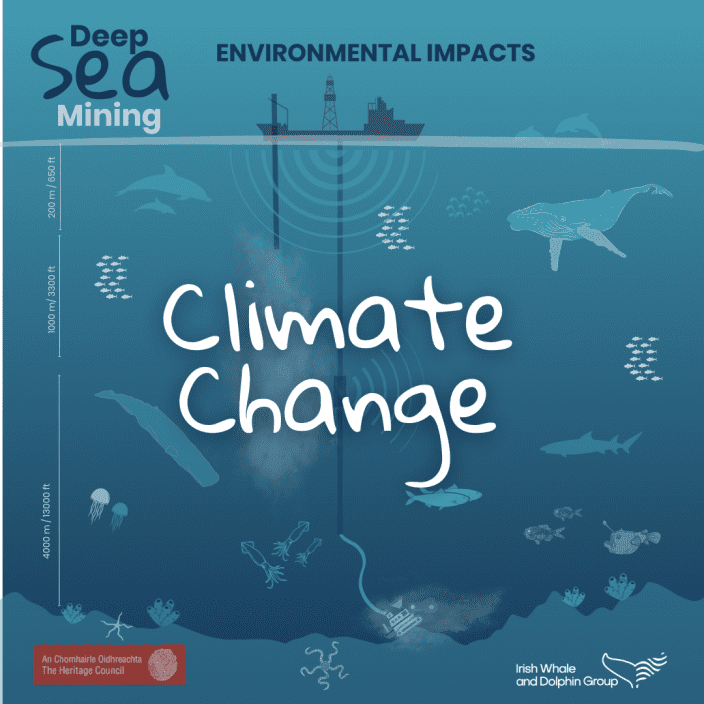 Did you know that the ocean contains the largest store of CO on earth?! It is estimated that in the top 1 metres of the deep ocean (>1000 m) marine sediments store approximately 1,962 gigatons of carbon. This is the equivalent of 50 years of current human carbon emissions!

Sediment pumped to the surface during the deep sea mining could release undetermined amounts of sequestered carbon from marine sediments which is likely to be re-emitted into the atmosphere.

The release of carbon will impact ocean acidity and contribute to global warming, affecting ocean ecosystems, including cetaceans. The demand for green energy is said to be fueling the demand for deep sea mining. Is DSM set to be a cure or a curse for climate change?

The Irish Whale and Dolphin Group (IWDG) does not wish to support Deep Sea Mining (DSM) at this time as knowledge of deep-sea habitats are extremely limited and any commercial mining is acknowledged to lead to widespread benthic biodiversity loss at a time where the planet is already looking at the collapse of biodiversity worldwide. Our comprehensive review document is intended to highlight some of the impacts that deep sea mining will have on the marine environment. 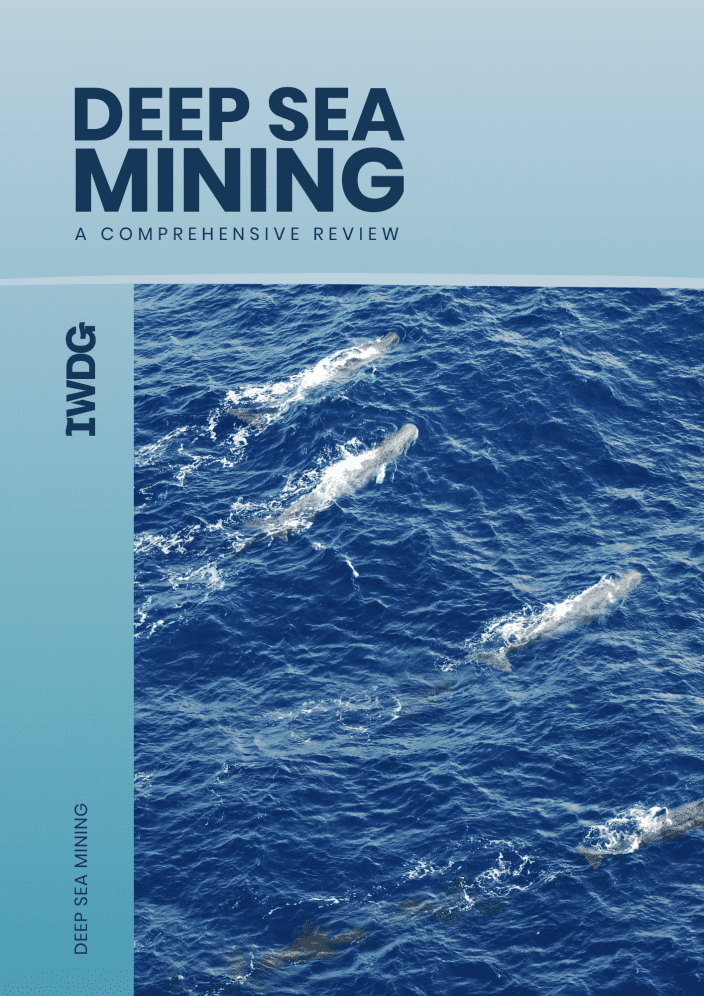 A technical policy is also currently being produced which, alongside the information provided in the first policy, provides additional technical information. This policy will set out a series of recommendations which will contribute to ensuring the protection of cetaceans and their habitats. These recommendations will aim to inform the industry, members of government and other key stakeholders on the impacts of DSM and the failings of current practices and policies, including the need for the introduction of an independent regulator.