On 8 August Liz Morrow was on a boat trip in Donegal Bay when they encountered a single large whale off Slieve League that was about 2.5 – 3 times larger than their 6.5 metre RIB. The sighting was reported to IWDG with images as a “probable” fin whale and on viewing all the images, we are satisfied that this was indeed a fin whale Balaenoptera physalus.

Such a sighting would hardly raise an eyebrow along the Celtic Sea area or in any southwest waters inshore or offshore, as this species is frequently seen and reported to IWDG between June and January. We can have fin whales in inshore south coast waters for 10 months of the year, but the northwest is a very different matter. This record is remarkably the first validated fin whale record for Donegal Bay and for any Donegal inshore waters and a further sighting off the Teelin area, whilst validated as a “large whale species on 13 August, may well have been the same animal.  On 18 August a humpback whale was captured breaching  off Malin Beg by Brian Fowley. 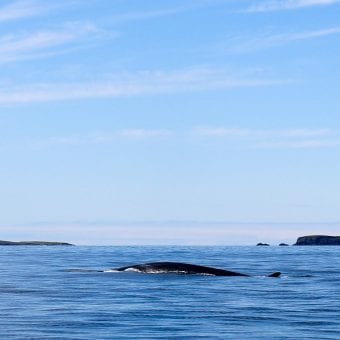 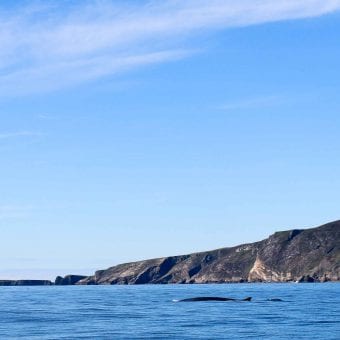 Is the arrival of large whales into Donegal Bay a new phenomena, or were they always there and just went unnoticed?  We’ve had plenty of the much smaller minke whales reported and validated over the years from this area and so it’s hard to see how the recording scheme would pick up the much smaller rorqual cousin, and miss something like the planet’s second biggest animal. Historically fin whales were abundant enough in Donegal Bay to encourage a local whaling  enterprise out of Inver Bay so there is certainly some evidence they were more abundant than they are today.

So this could be an interesting time for local IWDG members in Sligo looking north across the bay from places like Mullaghmore or for Donegal members watching from the many superb vantage points from St. John’s Point west towards Rathlin O’ Beirne.

Any large whales that simply look too large to be a minke or humpback and produce a powerful columnar ” blow” on surfacing, should be considered as likely candidates. They will often be accompanied by common dolphins who hunt the same sprat and herring shoals and they rarely lift their tails before diving.  If you think you may have fin whales with you, best to approach them from the right side and photograph their head and rostrum, which should reveal the diagnostic lower white right jaw (which is dark on the left side).

It’s an interesting time and such sightings serve to remind us that despite the recent difficult news from Rossnowlagh of the mass stranding of Northern bottlenose whales, there is much good news to report on www.iwdg.ie. 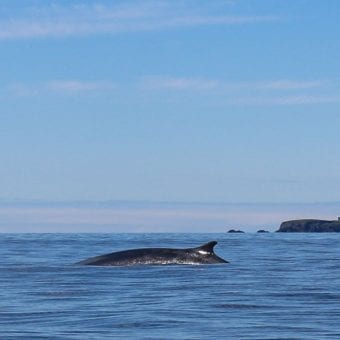