There is a natural order as to how species of marine megafauna appear each year. Whilst always allowing for occasional outliers, the season generally starts slowly, building to a peak and then sightings taper off, till they’ve largely all left, presumably for pastures anew.  The basking shark Cetorhinus maximus is no different.

2021 was a good year for basking shark sightings records, with 161 sightings validated by IWDG. It was in fact the 4th best year since IWDG started handling records of the planet’s second largest fish; shared jointly with 2008, but still some way off the 2009-2011 peak when we validated 240, 204 & 176 records respectively. 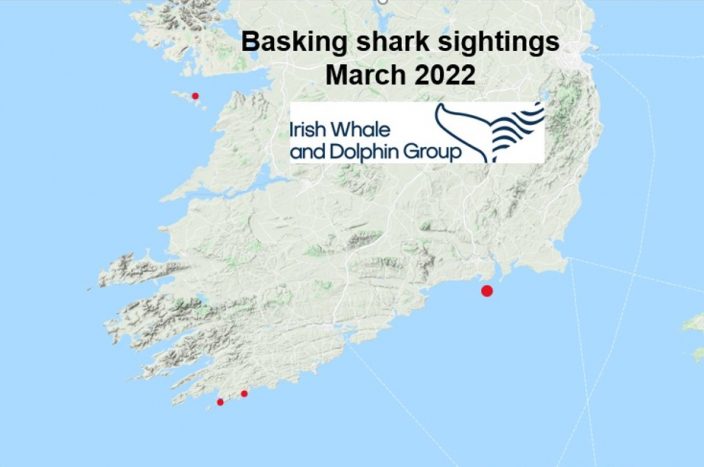 Our 2022 basking shark season has it seems began, and to say it started with a bang would be something of an understatement!  Over the weekend whist attending the Irish Skipper trade show in Limerick, we received our first shark images, one from Inish Mor, Aran Islands and another from Baltimore Beacon in West Cork. There is nothing that unusual about these records, either in terms of their timing or location. Over the past 20 years, the majority of first inshore sharks have been reported during April, with March following in 2nd place and February coming in 3rd.  As to where these early arrivers are first recorded, Counties Waterford, Cork, Kerry and Donegal comprise the majority of these reports.

So what was so unusual about Charlie O’ Malley’s observation on Thurs. 24th March, some 6-8 miles southwest of Hook Head, Co. Wexford, was neither the time nor the location, but the sheer numbers. Charlie described there being so many sharks in the area, that he had to slow down to avoid hitting them. His best estimate was a minimum of 100 animals, but likely to be much closer to 150 individuals, making this quite likely to be the largest aggregation documented to date by either the IWDG or the Irish Basking Shark Group. Charlie also described there being many large specimens in the 20ft+ length range.  Having spoken with him this morning (29th March) to validate this record, we have no reason to doubt the veracity of this report…..Charlie hails from Achill Island and basking sharks are a species that run in his blood so to speak, as his father was involved in this fishery off Purteen harbour, Achill in the 1960’s when sharks were more abundant than they are today.

This is an incredible kick start to the 2022 basking shark season and given the recent Irish government decision to bring them under the Irish Wildlife act (Section 23), it is good to know that this iconic species will in the near future have a level of protection from interference and wilful harassment, which they’ve previously not been afforded under Irish law.

We extend a huge thanks to Sorcha Kennedy for alerting us to this activity and Charlie O’ Malley for taking the time to share his experience with us.

Map Courtesy IWDG and image above by Tiernan Roe