On Sunday 14th November, IWDG received an online sighting report of what at a glance seemed like a fairly ordinary sighting of a pair of harbour porpoises; a species that are regularly seen and reported to IWDG off Clogher Head, Co. Louth.

However, the report got a whole lot more interested on reading the comment section, where the observer, Andy Smith. could offer greater insights into what he actually saw whilst fishing off the pier at Clogher Head.

“Initially we saw what looked like an adult and a calf porpoise. The reason I’m reporting the sighting is that unfortunately we witnessed the calf being killed by a large male seal. We were fishing from the pier and it happen in front of us. We initially saw the mother and baby about 200m out to sea but about 20 minutes later the seal surfaced with the baby porpoise in its mouth. It was quite violent and bloody. Thankfully there were no kids around to witness it. Nature raw in tooth and claw I suppose.”

On reading this, I immediately phoned Andy and discussed what he’d witnessed and the veracity of his account left me in little doubt other than he had witnessed a very rare event indeed in Irish waters and even rarer still to capture the event on video.

What you are looking at is an adult grey seal (gender unclear) towards the end of the interaction with the harbour porpoise calf in its mouth. The seal appears to be attempting to drown its victim before commencing to feed on it.

A paper published in the Marine Mammal Science journal by THIBAUT BOUVEROUX et al. 2014 titled …”Direct evidence for gray seal predation and scavenging on harbor porpoises” provided the first proof of grey seal predation on harbour porpoises, but in the Eastern English Channel and southern North Sea.  However, this behaviour has never before been documented in Irish waters, which is surprising given the large populations we have of both coastal species.

IWDG is delighted to have the opportunity to validate this important record and to share the video with you on the link below. Please be warned that it graphic and may cause upset to younger viewers. Such events are important to document and it raises many questions, such as …

Video now on IWDG Vimeo: click on image for link 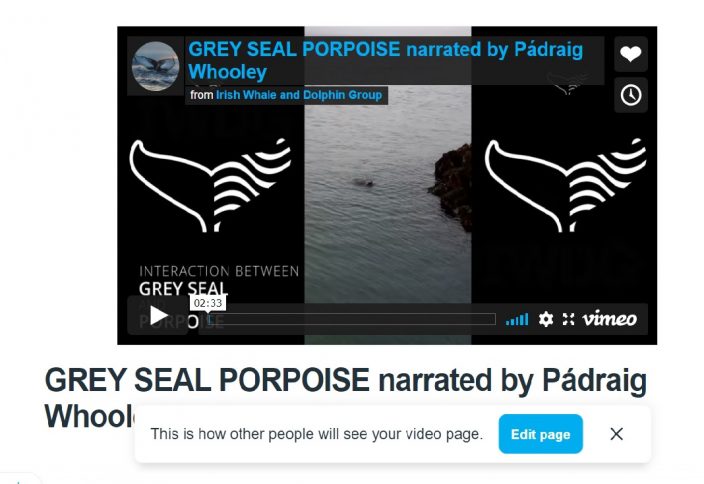 We’d like to extend a big thanks to Andy Smith for initially reporting this observation to IWDG and to Dermot Henry & Andy for sharing their video footage with us. Also a shout out to Tony Whelan our film maker in residence for editing the video you see here.