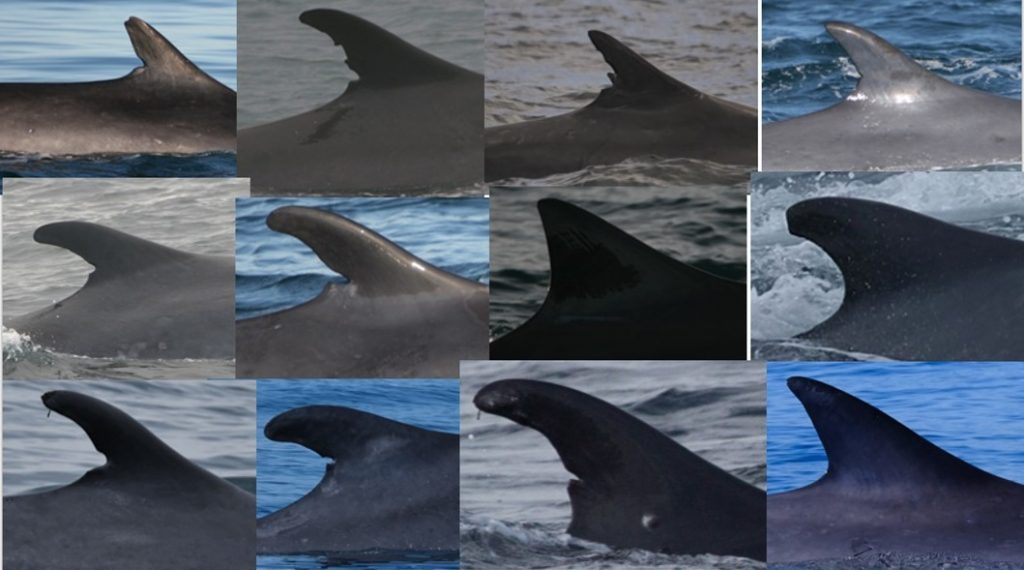 Remember fin whales?  Yes, these are the large whales that really kick started the IWDG’s Whale Track, or the “Large whale Project” as it was known some 20 years ago. It’s so easy to forget with so much of the emphasis in recent times on humpbacks, that fin whales were historically the more dominant of our two large baleen whale species, in terms of both reliability of encounters and group sizes. And so West Cork found itself catapulted onto a shortlist of must go places on the North Atlantic’s whale watching circuit. 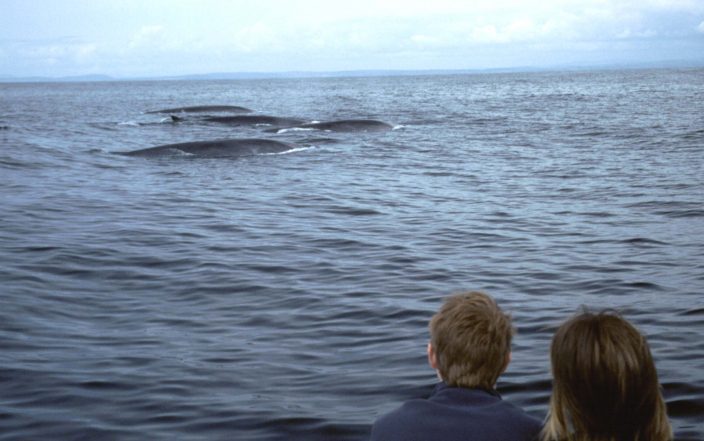 We recall trips out with a younger Colin Barnes on a shinier “Holly Jo” in seas that were brimming with sprat and of course the “Greyhounds of the Sea” (fin whales)  that persued them.  There were years during the mid 2000’s when motoring back into Reen Pier, the question wasn’t so much whether we found fin whales, rather could we count them, as the numbers were routinely a dozen or more and on occasion those numbers got dizzy. I remember one trip when we must have seen 40+fin whales and then throw in some minkes and a few humpbacks and it became very easy to justify our early claims that the Irish South coast, given suitable weather, offered some of the best land and boat based whale watching on the planet.

Then almost ten years ago there was a subtle shift, as humpbacks started arriving in greater numbers and in new locations and soon west Cork’s fin whales had to share the spotlight with the smaller but more charismatic humpback.  It wasn’t just the species that changed, so too did their habitat preferences, as they started appearing around the Blasket Islands and Dingle Bay area and before we knew it, west Kerry had a good claim to the title of Ireland’s premier whale watching location.  There was a sense that we were no longer seeing fin whales in Autumn in anything like the numbers we once did, and the data below suggests that fin whale sightings were at best flat lining, while humpbacks were on the rise. 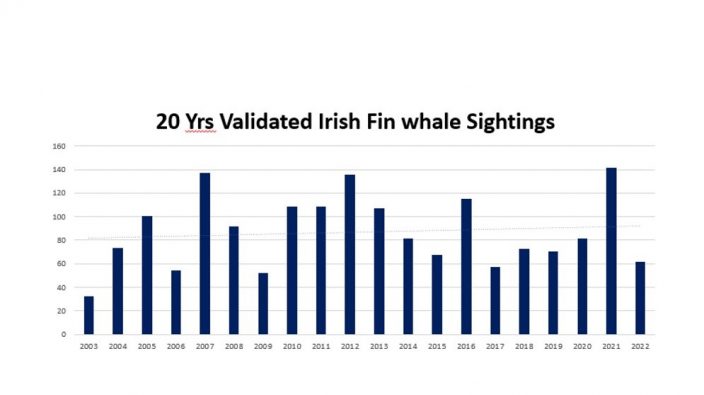 For a number of very good reasons IWDG focussed our Photo ID effort on the humpback. Dare I say it, they were low hanging fruit. As any of you who have had the good fortune to be in the company of either species will appreciate that fin whales are difficult and humpbacks are easy…..well easier!  Let’s elaborate a little on this; as their nickname suggests fin whales are fast and no matter how much horsepower your engines pull, you’ll struggle to catch up and keep up with them, unless of course they want you to. Humpbacks by comparison are slow moving and relatively easy to approach, unless of course they don’t want you to!  As a result you tend to get a much higher return for photo ID effort on humpbacks, as your target area is a very large and always uniquely marked tail, which can measure 15ft across when fluking. Compare this to a fin whales’ relatively small dorsal fin and the fact that a high proportion of them look rather generic and even if they do have a notch, they are frustratingly often in the same place at the base of the dorsal fin’s trailing edge. (see images below)

So even a low quality Photo ID image of a humpback can produce a result, in fact tourists on a whale watch boat taking images on a smartphone can often by fluke (pun) achieve an ID without realising it. In contrast, you can be in an area with lots of obliging fin whales and calm sea conditions and possess the fastest camera with a long zoom lens and take 100’s of images and the chances are very few, if any of them will produce much by way of useful Photo ID value. So unless you’ve all your ducks lined up and your skipper really knows his whales and is comfortable getting close to the second biggest animal on the planet, you really do rely a lot more heavily on lady luck when carrying out Photo ID on fin whales.

But this is more the mechanics of large whale photo ID, there is a more important point which is the conservation dividend. Fin whales because of their sheer size and speed were never, in the early days of whaling anyway, exploited commercially in the North Atlantic in the same way as the more accessible humpbacks and other slower rorquals and so the demonstrable arrival of more humpbacks to the Irish southwest was of international significance and back then there were very few countries recording a similar bounce in humpback numbers than we were enjoying in Ireland.  So with this in mind IWDG invested considerable time and resources into building up the Irish Humpback Whale ID Catalogue which we’ve written about extensively on these pages, but what of the fin whales?

Well this question was put to me several years ago by a man who knows a thing or two about observing and photographing fin whales, our own Andrew Malcolm from Waterford, and it caught me a little by surprise as I didn’t have a good answer for him, but he made a valid point and I promised him that it was on my to do list and when the time was right that he’d hear from me.  Well that time was about two weeks ago and he has heard from me.

So over the past fortnight we’ve been making the most of the current spell of poor weather, wading through gigabytes of fin whale images, accumulated over the years and by a process of elimination we’ve whittled them down to what we consider to be 53 well-marked individuals, several of whom have been recorded over multiple years. As with the humpback catalogue, these animals have been allocated unique references with associated sightings histories and are stored on a Google drive for ease of matching new images and sharing with colleagues both at home and overseas. 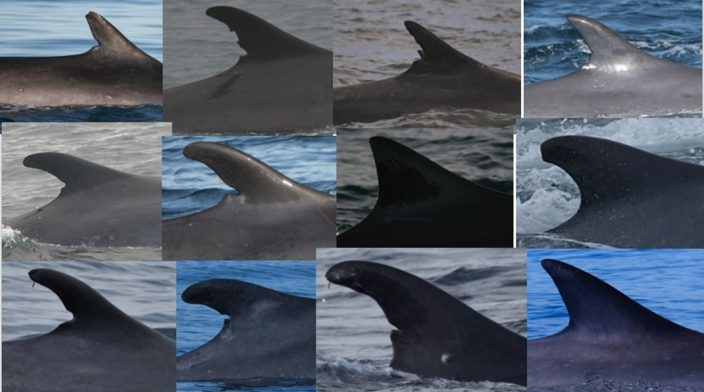 Sample of dorsal fins illustrating how they help with photo identification

So this is a request to any of you who may have strong fin whale images that are: medium to high resolution, are sharp and where the focal animal was ideally within <100 mts and especially if it has a well-marked dorsal fin or linear scars, blemishes, signs of ship-strike injuries, entanglement marks etc; we’d really appreciate your emailing any such images to IWDG for matching on the catalogue to e: sightings@iwdg.ie.  It only takes one strong image to reveal an animal’s identity and in time this Citizen Science resource should begin to tell us more about the life histories of the wider cohort that arrive annually along the Irish South coast most years during May. 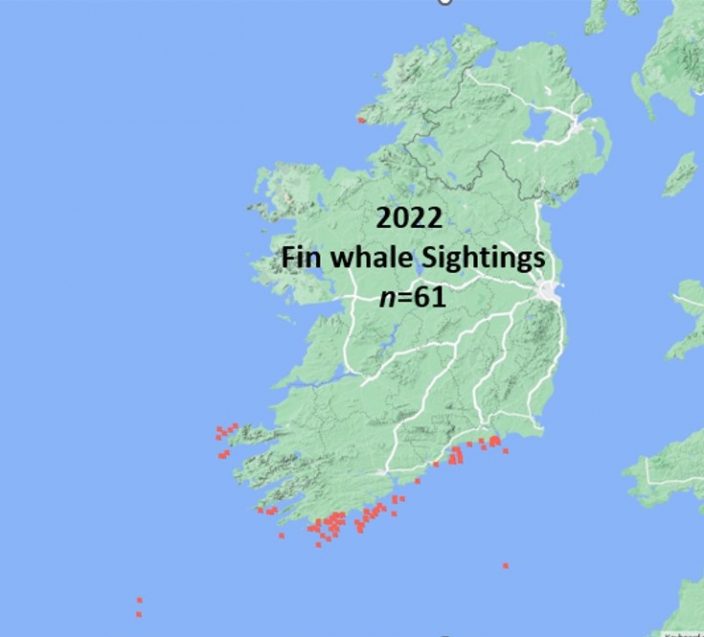 2022 was a disappointing year for fin whale sightings, but was this due to very poor autumn weather?

Given the nature of fin whales and what appears to be declining numbers in Irish waters, this catalogue will no doubt throw up many challenges in the years ahead, but we’re confident there will also be some fascinating discoveries that will help inform future management plans for the largest whale in our coastal waters.  As with the humpbacks, one of the first questions we’ll be hoping to answer is where are their breeding grounds. It’s remarkable that thus far this vital piece of ecological information has eluded whale researchers……perhaps the Irish Fin whale catalogue will help solve this mystery?

In the coming week we’ll make an abridged version of the Irish fin whale catalogue available on www.iwdg.ie, so you can try to match any fin whales you are fortunate to encounter. Let us know how you get on.