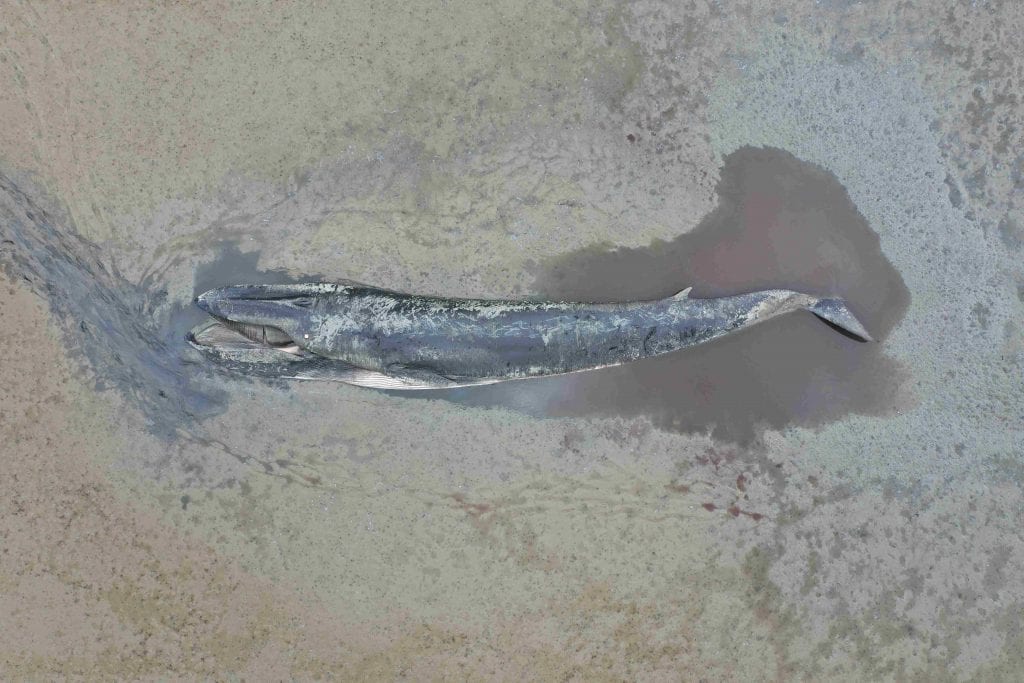 To date, IWDG have received a total of 291 stranding records in 2021. This represents a 62% increase compared to this time last year, which in itself was a record year for strandings. COVID-19 restrictions have most certainly lead to increased reporting, however, Ireland was in full lockdown starting 27 March 2020. If this increase in stranding records were primarily due to increased reporting as a result of COVID-19, one would not expect to see such a dramatic rise in 2021. 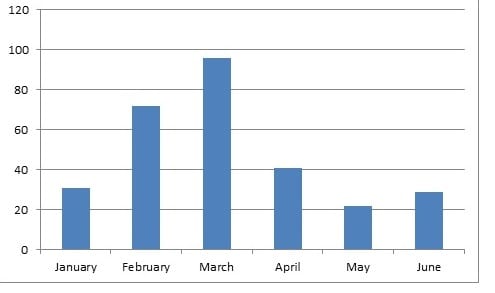 There have been a total  of 26 reported live strandings (14 of which were successfully refloated), comprising four different species in the month of June alone; common dolphins, fin whale, pilot whale calf, and an Atlantic white-sided dolphin. The last time the Atlantic white-sided was reported was one animal back in 2018, and three in 2015 before that 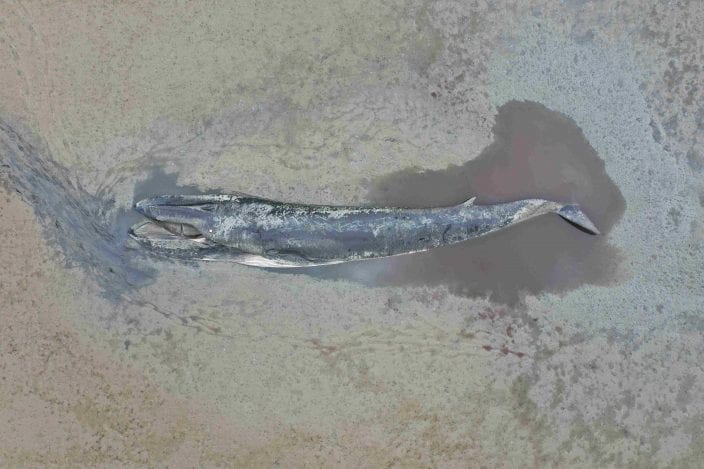 Photo 1. Fin whale in Co. Donegal on 20/6. This animal was reported swimming in the area on the 19th, and live stranded the following morning. It died on the evening of the 20 June . Photo courtesy of the National Parks and Wildlife Service.

Numbers have been on the downward trend since the catastrophic winter peak, though numbers for June are slightly higher than May (Fig. 1) – we are hoping this will decrease once again in July.

If you would like to join the IWDG Cetacean Stranding Network to help us collect valuable data from these animals, please contact Stephanie at strandings@iwdg.ie.

Report your Stranding and Sighting records more easily via the IWDG Reporting App for mobile devices.

This winter has proven to be the worst on record with regards to stranding’s. However, after the month of April, we have seen a significant decrease in reports compared to March, during which a whopping 96 animals were reported (Figure 1). Let us hope that this downward trend will continue over the following months. 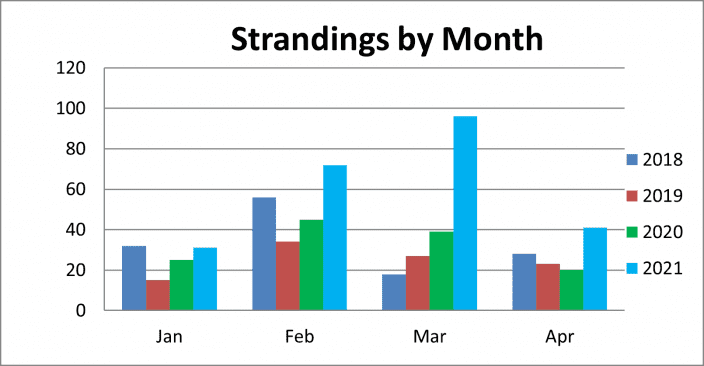 The previous winter peak had been recorded in 2018, with a total of 134 records validated from January to April (Figure 1). From January to April this year, IWDG have validated 241 stranding records along the Irish coast which include eleven different species of cetaceans, two records of basking sharks and one loggerhead turtle (Figure 2). As we expected, the majority of these (n=185) were common dolphins. 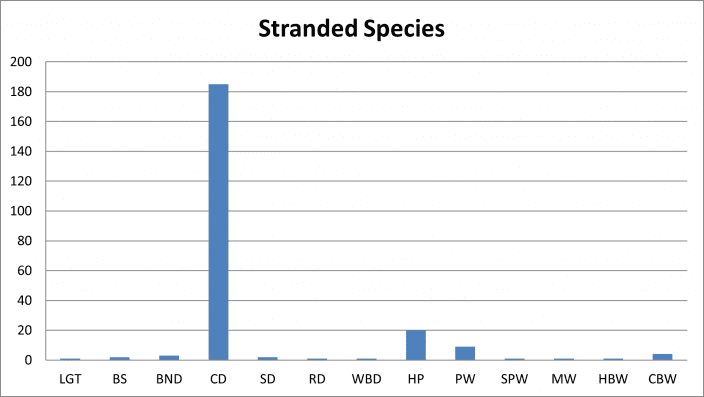 These figures include 20 live strandings (all which involved common dolphins), of which ten were successfully refloated. There is always a possibility of duplicate records with live strandings as they may re-strand elsewhere at a later date and perish on land. With the assistance of our Cetacean Stranding Scheme Volunteers, we are currently testing out a few methods to identify if the animal re-strands, one of which involves putting a bit of cotton wool around the tail.

As we would expect, the majority of records were reported from county Kerry, followed closely by counties Galway and Cork (Figure 3). 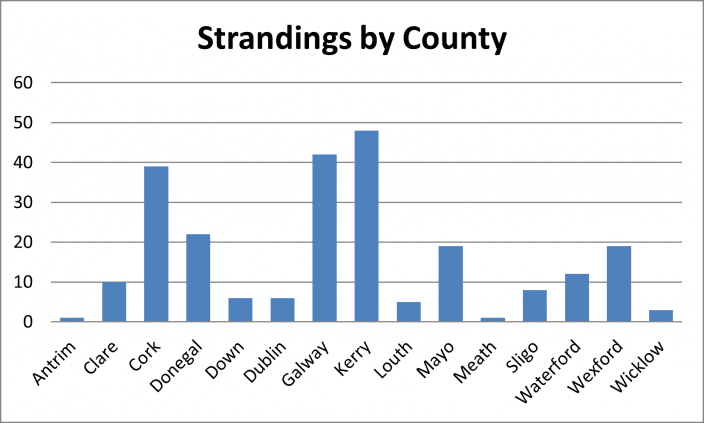 There were two Cuvier’s beaked whales and one common dolphin stranded on the same beach in Donegal at the same time in April. The whales comprised one male and one female, both in extremely fresh condition. This year, we have recorded four stranded Cuvier’s beaked whales. Although they are no longer a rare species to strand on our shores, we would normally receive an average of 3-4 records of this deep diving species per year. For the moment, we are not considering this to be significant, although we would be concerned should anymore reports come in within the next month or so. 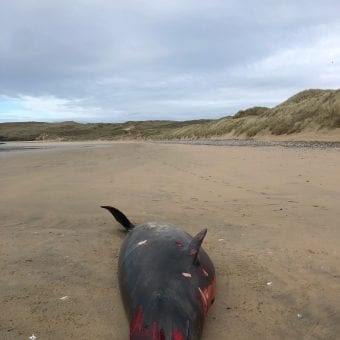 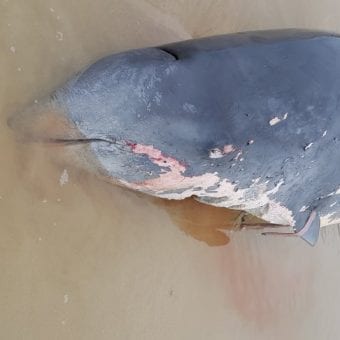 As the Stranding Office for the IWDG, I am always asked the same question; Why are there so many strandings being reported? I always have the same response – we are not sure. We have our suspicions, but additional support and resources are required to investigate them to a higher standard. There are a number of potential causes at play from human mortality (fishing, acoustic trauma), to a possible increase in abundance in inshore waters, distributional shifts driven by warming oceans, increased reporting due to COVID lockdowns, and of course, natural mortality.

As it stands, we are only able to suggest probable cause of death when we see an animal clearly caught in a net, or with amputated tail stocks, fins etc. If the government were to establish a long term post-mortem scheme to examine a sub-sample of these animals, as well as the rarer species, we would have at least some hope at answering the question, “Why are they stranding?” IWDG efforts to get this scheme established in Ireland are ongoing, and involve a Large Whale Stranding Protocol which has been drafted and is currently being circulated to relevant organisations.

Once again, a massive thank you to all of the citizen scientists who make the stranding scheme possible by sending in stranding records to IWDG. Please continue to report your strandings to the Irish Whale and Dolphin Group. IWDG have been recording strandings in Ireland for 30 years, and it is extremely important that such long term schemes are protected and maintained. This allows us to identify significant stranding trends and unusual mortality events, and try to understand the causes behind them so we can properly inform conservation managers and influence marine policy.

Please get in touch if you wish to become a volunteer with the Cetacean Stranding Scheme Network at strandings@iwdg.ie.