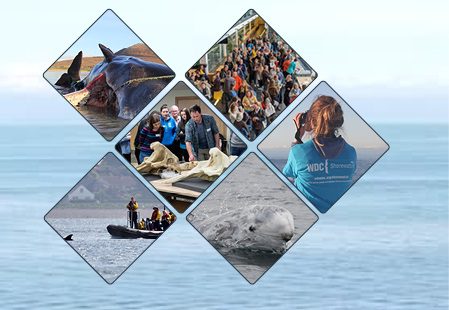 Last weekend the IWDG team made their way to Glasgow for a packed weekend of talks, interactive sessions, and exhibitions. Becky, Science Officer and Sibéal, Education and Outreach Officer attended the Marine Forum 2022 hosted by the Scottish Marine Animal Stranding (SMASS) and Whale and Dolphin Conservation (WDC). The Marine Forum is an annual event aiming to facilitate knowledge exchange between researchers and citizen scientists who have helped to collect important data around Scotland. 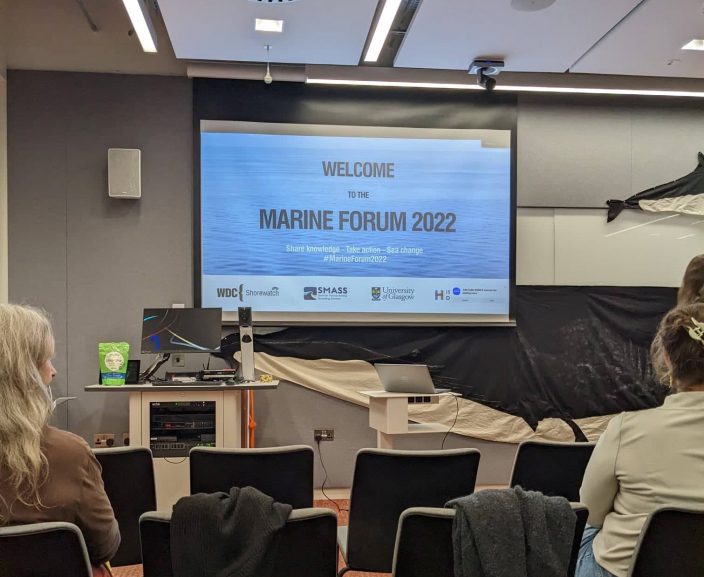 The theme of this year’s forum was collaboration between all different sectors a focus which IWDG strongly supports and marked the 30-year anniversary of SMASS. The day began with an inspiring talk from keynote speaker Ailsa Hall, Research Professor from the Sea Mammal Research Unit (SMRU) who told ‘takes of teamwork’ throughout her career and how collaboration and cooperation has increased in recent years to the benefit of scientific projects and discovery’s. Dr. Andrew Brownlow, then took us on the journey of three decades of SMASS, which was established back in 1992. SMASS is part of the Cetacean Strandings Investigation Programme (CSIP), investigating Scotland’s marine species by collating, analysing, and reporting data of cetaceans, seals, marine turtles, and basking sharks that strand on the Scottish coastline. Andrew illustrated how monitoring strandings can provide an insight into long-term trends in distribution of individual species and ecosystem health and how examining stranded individuals can provide insights into the lives of marine mammals including population health, ecology, and threats such as contaminant levels. The final talk by Chris Butler-Stroud, Chief Executive of WDC highlighted how the conservation of cetaceans in our waters is a team effort and how collaboration is crucial in every aspect of marine protection.

We were then flooded with a host of interesting short takes and stories which again highlighted the importance of collaboration. These included a fascinating and humorous talk from Tim Awbrey on his PhD research on minke whales in Scottish waters resulting in my favourite quote of the weekend ‘Minke whales are so hot right now!’. We couldn’t agree more Tim! Other thought-provoking talks came from Emily Hague who talked about her research on AIS ship tracking data and how citizen science can be used to calculate the proportion of boats not transmitting AIS, which has huge conservation implications such as anthropogenic noise, and Niki Clear from Joint Nature Conservation Society (JNCC) who highlighted the important work of the Dolphin Bycatch Project.

One of the best parts of the forum was the interactive sessions that took place in the afternoon. These sessions allowed the IWDG team to chat to many different organisations and researchers about their work and form new connections. We talked to the entanglement mitigation team including Bally Phillips from Scottish Creel Fishermen’s Federation and the Large Whale Disentanglement Team (LWDT) from BDMLR. We also caught up with the team at the Hebridean Whale and Dolphin Trust (HWDT) who were presenting their Whale Track project and Dr Denise Risch from the Scottish Association of Marine Science (SAMS) who was talking all things acoustic.

It was an amazing event with fantastic talks and conversation as well as some of the best conference food and drink (the event was sponsored by Harris gin) we’ve ever had! Thanks to SMASS and WDC for having us!