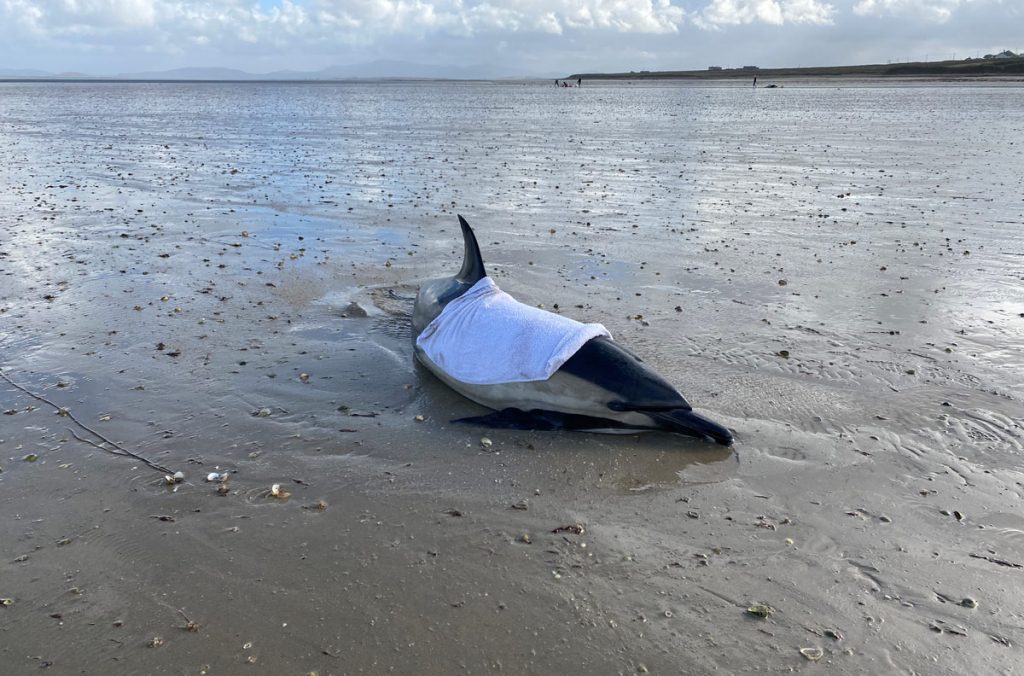 Tarmon (An Tearmann) lived up to its reputation as a live stranding hotspot again on the 26th of October 2022 when 24 common dolphins were found live stranded on the outgoing tide. It’s a beach that keeps on giving! A mother and calf were also found live stranded at Elly bay further north inside the Mullet Peninsula at the same time, bringing the total number to 26. The group consisted of mainly females and a few dependent calves, which were tiny, scratch free and still sporting their fetal folds.

A stranding of this size is an enormous undertaking, but the response by the local IWDG stranding network was fantastic as was that of Ballyglass RNLI, Ballyglass Coast Guard and the community & visitors who came to help. Everyone worked really well that day in what can be described as an overwhelming situation for many, especially for those whose first live stranding it was. Thank you all!

The mother and calf at Elly were relocated by road to Blacksod slipway by IWDG stranding network volunteer Tom Breathnach and Frank Gereghty of Ballyglass RNLI. This gave her quick access to deep water.

We didn’t have the people or the resources on the day to relocate 24 dolphins to Blacksod without splitting the pod and the team of volunteers between two locations plus it’s always best to keep the pod together. Re-floating at Tarmon does come with a risk of re-stranding for the dolphins. I often feel if they didn’t make it out the first time while healthy, it’ll be even harder for them to navigate out to deep water after being stranded for hours. But resources and logistics determines what we can and cannot do at each stranding and we just have to do the best we can with what we’ve got on the day.

Responding to mass strandings on the Mullet Peninsula is a three stage process, stabilising, re-floating and monitoring.

Alas, it was during the monitoring stage a mother and young calf pair and another female from Tarmon were found around the corner from Tarmon in Cartúr. They were at the entrance of a stream and nosing onto the grass.  Now split naturally from the rest of the pod, the trio were transported to deep water at the south west of the peninsula.

In the following days volunteers checked beaches and two dolphin deaths were found.

If you’d like to become part of the stranding network, please do get in touch livestrandings@iwdg.ie as IWDG run Live Standing courses around the country annually from spring to early autumn.

Special thanks to IWDG Stranding network volunteers Agatha Hurst, Cornelia Kurz, Fiona Uí Chionnaith, Fionnula McGinty, Jo-anne Cadogan, Niamh Martin and Tom Breathneach, who all worked tirelessly over the 7 hour event to care for and re-float such a large pod. You can keep up to date on their live stranding efforts on their Mayo IWDG facebook page.