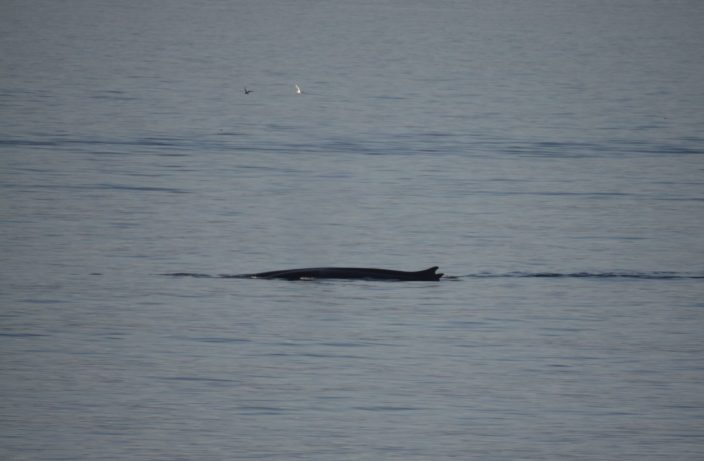 This past week the RV Celtic Explorer has been out in the Celtic Sea conducting the annual Celtic Sea Herring Acoustic Survey. The IWDG won the contract to place a Marine Mammal Observer (MMO) onboard to record whales, dolphins and other marine megafauna of note. On this survey, John Collins is the IWDG MMO onboard and the first week has been unbelievable for sighting marine mammals.

A blow from a humpback whale © John Collins/IWDG

On our first day surveying we left our anchorage in Dunmanus Bay in West Cork and headed south. Only three hours into the survey and we had seen minke whales, harbour porpoise and common dolphins. The next few hours it was blow after blow as we observed as many as eight fin whales and a humpback whale lunge feeding at the surface. It doesn’t get much better than this for the first day of a survey!! Or does it? 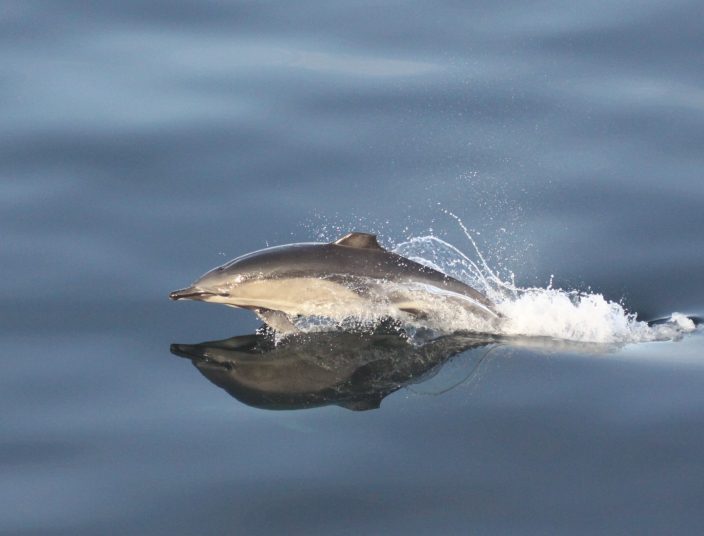 Well in the days after that we saw fin whales every day! A humpback whale was spotted close by to two fin whales. This is a familiar story in Cork and Waterford as photo id images confirmed this whale to be HBIRL3 also known as Boomerang! Oddly enough this humpback is seen close to fin whales most years instead of other humpback whales. 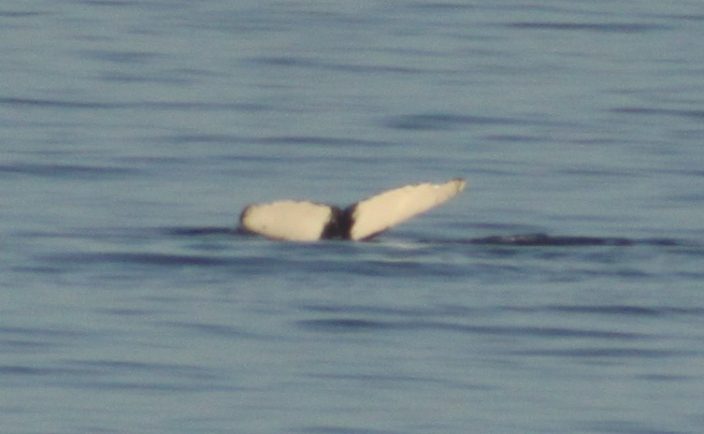 Every day the weather was ideal for spotting cetaceans however on the morning of the 13th only a few pods of common dolphins were seen which was the first quiet period of the trip. Then the evening came. Basking sharks! A rare sighting in October anywhere in Ireland. The sea was flat and we counted several sharks displaying interesting behaviours that may never have been seen off Cork in October. The observers on board were buzzing.

Then as the vessel turned around two fin whales lunged at the surface into a shoal of fish. It got better… Several hundred common dolphins were surfacing in all directions some coming in to bow ride. More Basking sharks appeared. It was a busy day for the MMO as four more fin whales were lunge feeding and resting at the surface. Two more Fin whales were seen near the horizon. Thankfully, it started to get dark giving everyone a chance to rest after a hectic day.

After the first day out I thought that would be the busiest day of the trip. Delighted to be proved wrong on the 13th. Let’s see what is in store for the next two weeks. The weather is set to get a bit rough but the whales will be here regardless.

Now at the end of the WESPAS 2021 Marine Institute survey, I am reflecting on all the sightings we have had and more specifically on the most recent sightings since my last blog update. Some great views of long-finned pilot whales, common dolphins, minke whales and fin whales have graced us over the past few days. Culminating over both legs of the survey, sightings have included: harbour porpoise; grey seal; common seal; common dolphin; bottlenose dolphin; Risso’s dolphin; white-beaked dolphin; Atlantic white-sided dolphin; long-finned pilot whale; minke whale; humpback whale; fin whale; ‘possible’ false killer whales; ocean sunfish and blue sharks, totalling 661 animals recorded! Quite a successful tally over this 5000+ mile journey! 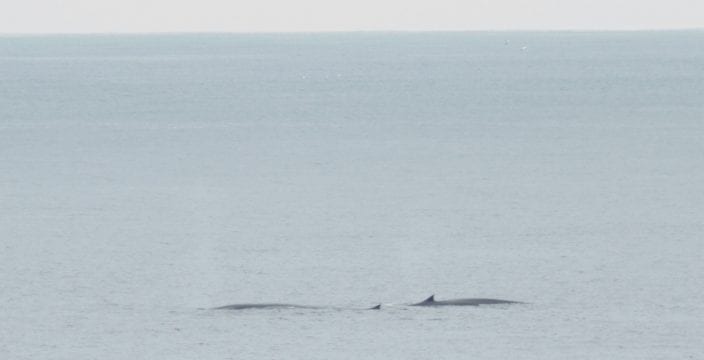 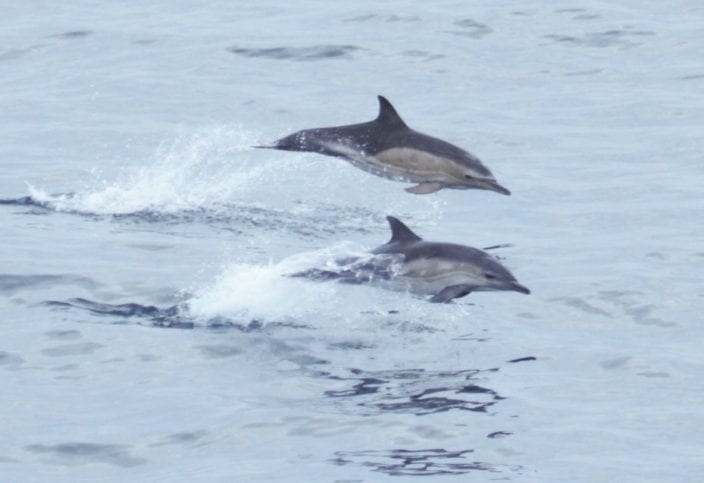 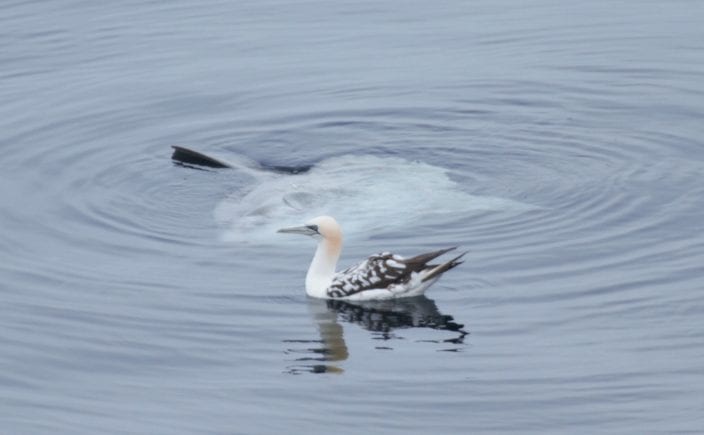 The past few days have been excellent in terms of marine mammal sightings, on board the Marine Institute’s Research Vessel: Celtic Explorer for Leg 2 of the trip. As we steamed past the north west coast of Ireland, sightings began to pick up rapidly, with great views of Risso’s Dolphins, Atlantic White Sided Dolphins, Humpback Whales, Grey and Harbour Seals, and an incredible amount of Minke Whales!!

With 10 days left of the trip, the bar has been set. Hopefully more of this to come over the remaining stretch of the trip! 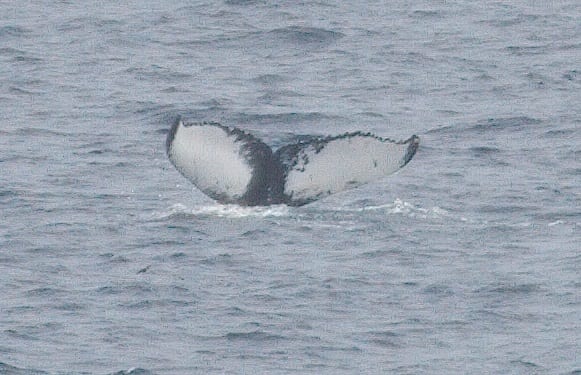 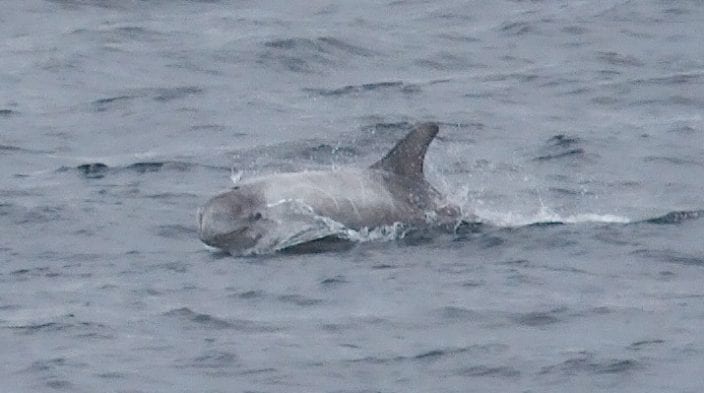 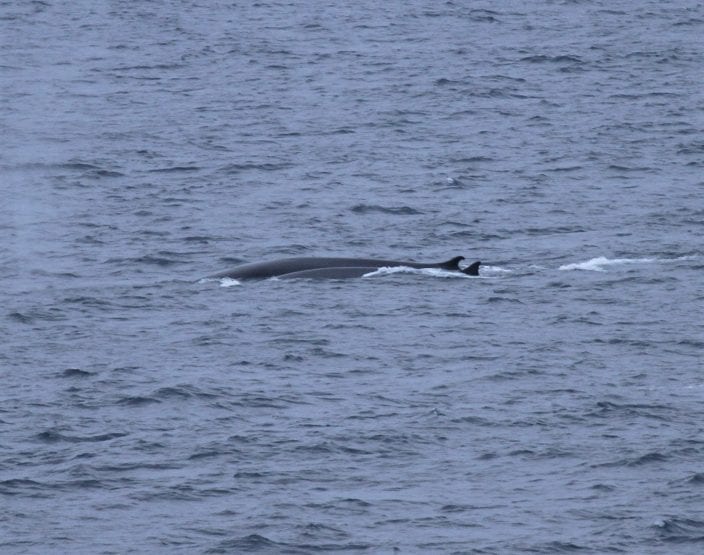 It has been a great start to the second leg of the WESPAS 2021 survey. In just the first three days, we have had sightings of minke whales, bottlenose dolphins, fin whales, pilot whales and possible false killer whales! The latter being an extremely exciting sighting as there have been less than 10 sightings of false killer whales in Irish waters. 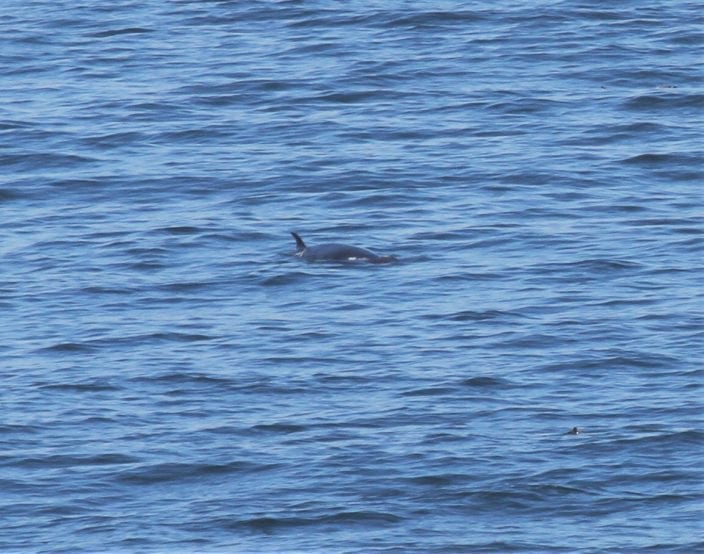 On the fish side of things, frequent sightings of sunfish and tuna have been filling in the gaps between the blubber. Here’s hoping the standard has been set for the remaining weeks of the trip !

It has been a mixed bag of highs and lows over the past week. No whales sighted thus far, but occasional pods of bottlenose and common dolphins as well as the odd sunfish have kept the spirits high. On the birds front, very cool sightings of Wilson’s Storm Petrels (an Antarctic species) and migrating oddities like swallows, swifts, housemartins and a quail (?) have also added to the observation fun. As we approach the end of the first leg of this 4800 mile journey and closer to West Cork waters, it is very much anticipated that we will soon be seeing some of the seasonal humpback whale action now they have moved closer to shore.

Sights continues to be cast towards the water…. 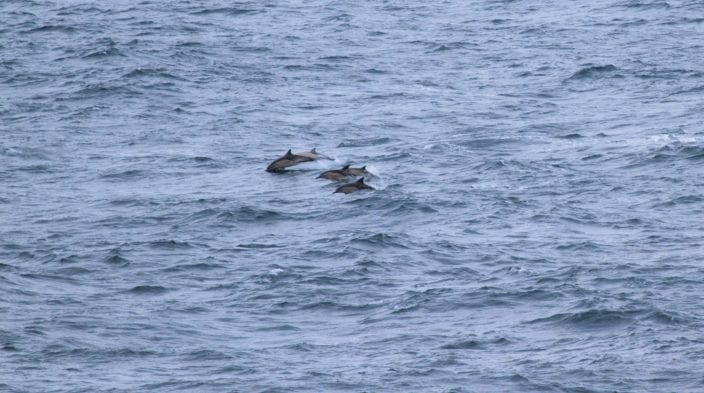 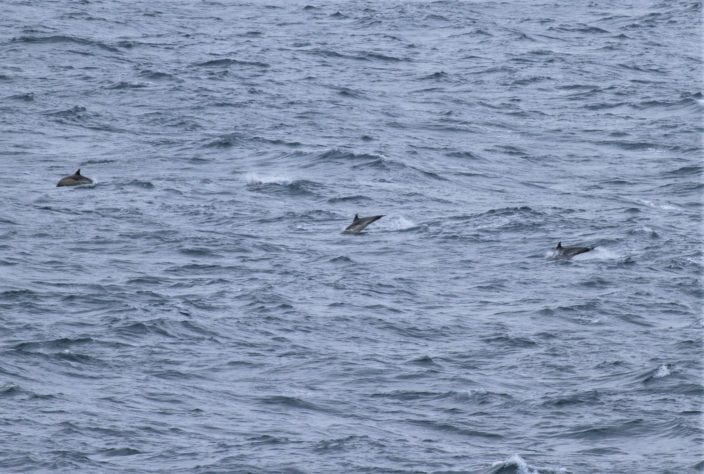 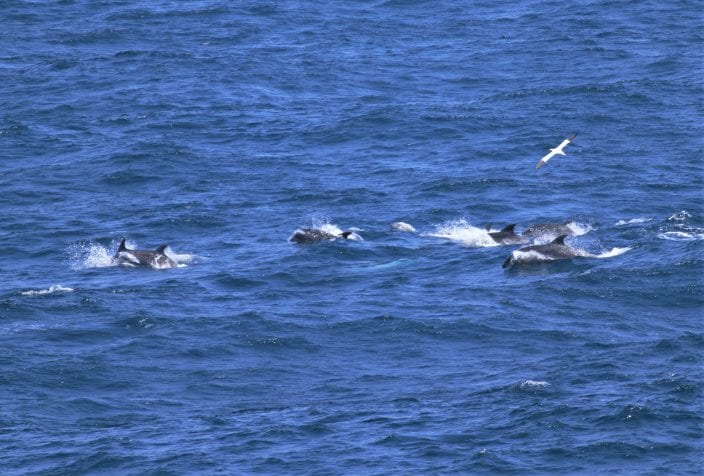 It’s been quite a slow start to this year’s WESPAS survey in terms of cetacean recordings. The first few days were hampered by dense fog, then nothing for several more. Even on the seabird front there were only a handful of birds over the week. Then on day 7 it felt like all the birthdays came at once when we finally got sight of two different pods of bottlenose dolphins, numbering around 30 and 10 individuals respectively. Other interesting sightings have been a few ocean sunfish, leatherback turtle, blue shark and Portuguese man o war. Although not as many sightings as expected thus far, optimism and morale remain high and I’m looking forward to the next few days moving north! 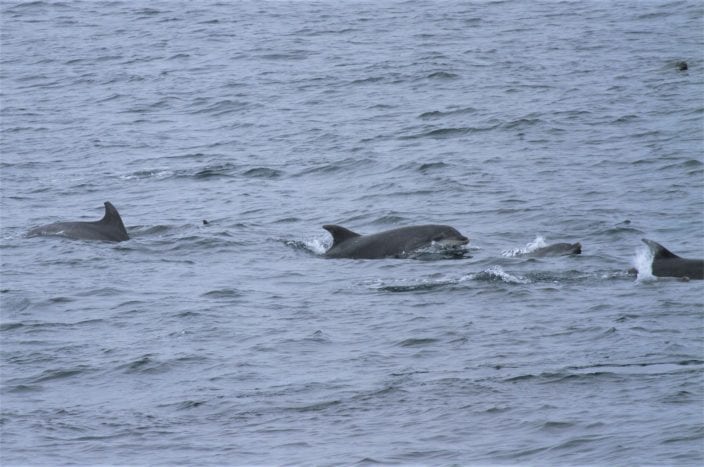 I am excited to be onboard RV Celtic Explorer once again, this time for the annual WESPAS survey which will be carried out over the next 41 days.

Today is day 1, test day, where we will be steaming to the other side of Galway Bay to calibrate the fisheries acoustic equipment. Later tonight we will set sail for offshore waters and begin our journey south to the coast of France, where the ship’s survey will begin. This first part of the trip will take two days and travel through waters rife with northerly migrating cetaceans at this time of year. Watch this space for the exciting sightings we’re expecting over the next few days! “Day 15 on the Marine Institute’s Blue Whiting Survey 2021. Since the last blog, it has been a mixed bag of good and bad days in terms of weather and sea conditions. A strengthening westerly storm meant we could only partially survey then had to take shelter along the north coast of Ireland. Once that passed we were greeted with several straight days of good conditions and the sightings began to rack up. We recorded common dolphins, bottlenose dolphins, humpback whales, sperm whales, pilot whales and a very deep diving and elusive beaked whale species: northern bottlenose whales. However, the trip highlight so far has to be the lone offshore male killer whale putting on a show for us by breaching, tail slapping and swimming upside down! It will be tough to top that, but there is still a week of the cruise left…“ 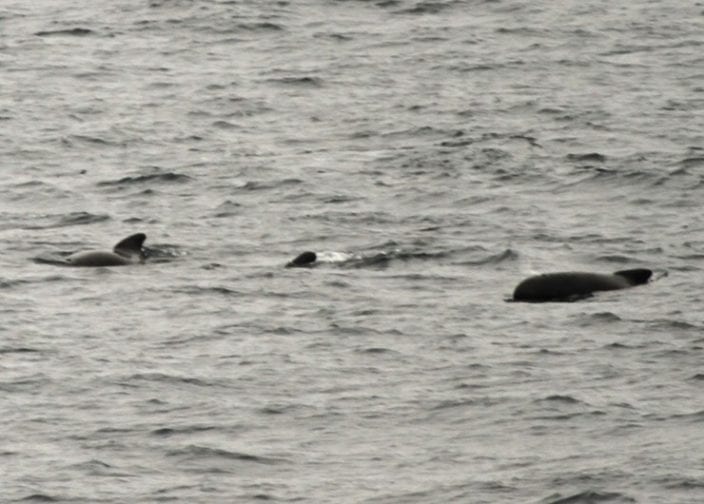 It has been an exciting first 3 days on the 2021 Blue Whiting Survey. Our journey out to the first transect line on Day 1 produced observations of a pod of up to 10 common dolphins and later the same day a pod of 6 pilot whales (4 adults and 2 juveniles).

Weather conditions deteriorated on Day 2 but we remained hopeful and although no cetaceans were sighted, we recorded good numbers of seabird species with the first trip highlights being great skua and blue fulmar. Day 3 (current day at time of writing) has proven less favorable with the weather, with big seas and high winds allowing us to reflect on our survey plans for the coming weeks Remaining eager for the bad weather to pass, we will see what sightings come up along the way! “