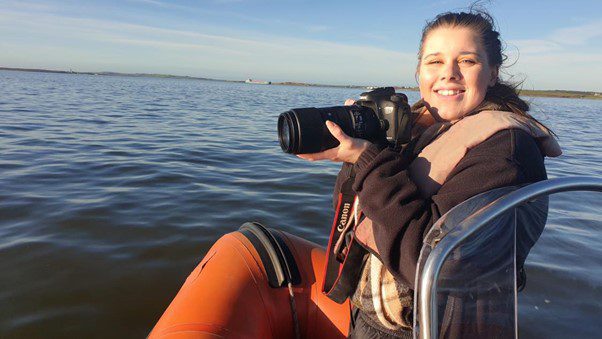 Came for a thesis stayed for the dolphins!

Hi, my name is Megan, and I am one of the Interns working with the Shannon Dolphin Centre this summer. Originally from England, I came over to Ireland in January for my master’s degree in Marine Conservation at ATU (Galway). I did my master’s thesis here in West Clare and studied the resident Bottlenose Dolphin population that we have in the Shannon Estuary.

My master’s project was titled “Characterising Skin Lesion Prevalence in a Resident Bottlenose Dolphin (Tursiops truncatus) Population in the Shannon Estuary, Ireland”. I worked on this project for six months, during which I was looking for skin lesions which are marks and spots on the dolphin’s skin, and these can be found all over from their heads to their tail. These skin lesions can be completely fine, just marks and scars from everyday life or interactions with each other. However, some skin lesions can be signs of disease, and depending on severity they can be signs of very ill health! 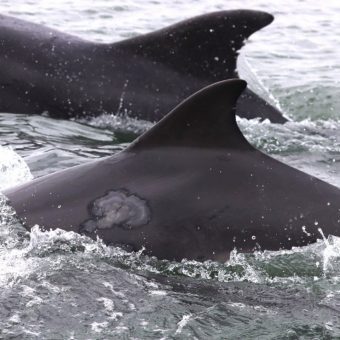 One of 2021’s calves with a type of Lesion called Tattoo this is pretty severe.

A big motivator of the study is the habitat of the Shannon dolphins which is of course the Shannon Estuary. In the last few years, the Shannon estuary has experienced a major increase in industrialisation and therefore it has become a very busy place with lots of boats from little canoes to massive tankers travelling up and down the estuary. The dolphins live in an acoustic world, which means they rely very heavily on their hearing in order to travel, forage and communicate with each other. As the estuary gets louder it gets harder for these dolphins to live their lives and they get stressed, just like you or I would if we found life hard! This stress can weaken their immune system, leaving them susceptible to diseases, and unable to recover as well as they usually would.

During this investigation I discovered that we have eleven different types of skin lesions on our population. Some of them were nothing to worry about, such as rake marks from interacting with other dolphins, or Orange Hue, which is where a certain type of algae forms an orange-coloured film over the skin of the dolphins. Others were more worrying, such as fringe lesions which could be caused by cetacean pox or a type of herpes virus! These diseases are often found in bottlenose dolphin populations and don’t have to cause a big worry but in high doses they can be fatal. 95% of the population were found to have skin lesions and this is such a high amount! We need to do some further research to find out if these dolphins are being severely affect by these lesions or whether they are something we just have to keep an eye on!

After I finished my masters, Mags Daly project coordinator for the Shannon Dolphin Project asked me if I would like to stay for the summer as an intern. And of course, I jumped at the chance. A summer in West Clare helping with the education and conservation of Irish cetaceans YES PLEASE! Since then, I’ve spent plenty of time out on the Shannon working on my photo ID skills. Its so nice to finally be out on the water with these dolphins looking 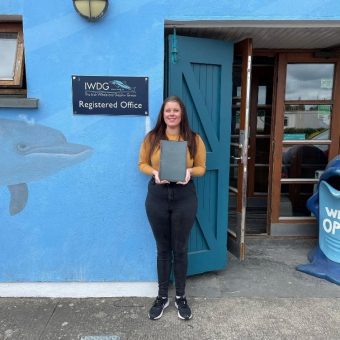 Megan with her completed masters thesis outside the shannon dolphin centre.

at them in real life, rather than holed up in the office just staring at pictures of them! Whilst I’ve been out, I’ve been able to get a good look at some of these individuals and I have unfortunately seen some pretty severe lesions. It looks like this isn’t a problem that will be going away any time soon and its good to see it in person and remind myself that these are really life enigmatic individuals that need my help and protection.

I’ve also got to spend a week on Celtic mist (the IWDG’s research vessel) as one of the biologists and we were lucky enough to see the Fenit Three. These are three dolphins that have come from Moray Firth in Scotland and now seem to have taken up residence just outside of Fenit harbour. The moray firth is one of the most studied populations for skin lesions and watching the Fenit three that day I can see why! They were riddled! Luckily our Shannon population don’t look like that yet, but this is exactly why we need to constantly monitor them, to make sure they never do!

Unfortunately, the internship is officially coming to an end at the end of August, however that doesn’t mean an end to my time at IWDG. Hopefully we’ll be able to publish my thesis so I’ll be spending the winter months, double checking my work and editing my thesis into a published paper. I’m also going to stay on throughout the winter months as a volunteer. Even though the centre will be closed to the public, after a summer of collecting all this data someone has to go through it! They haven’t managed to get rid of me that easily!