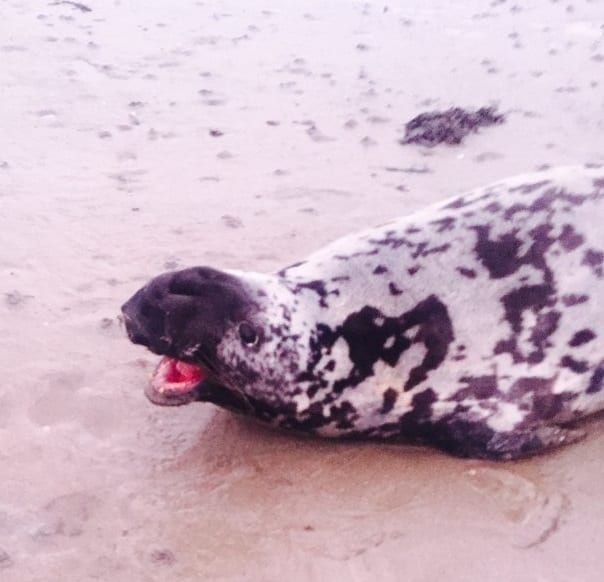 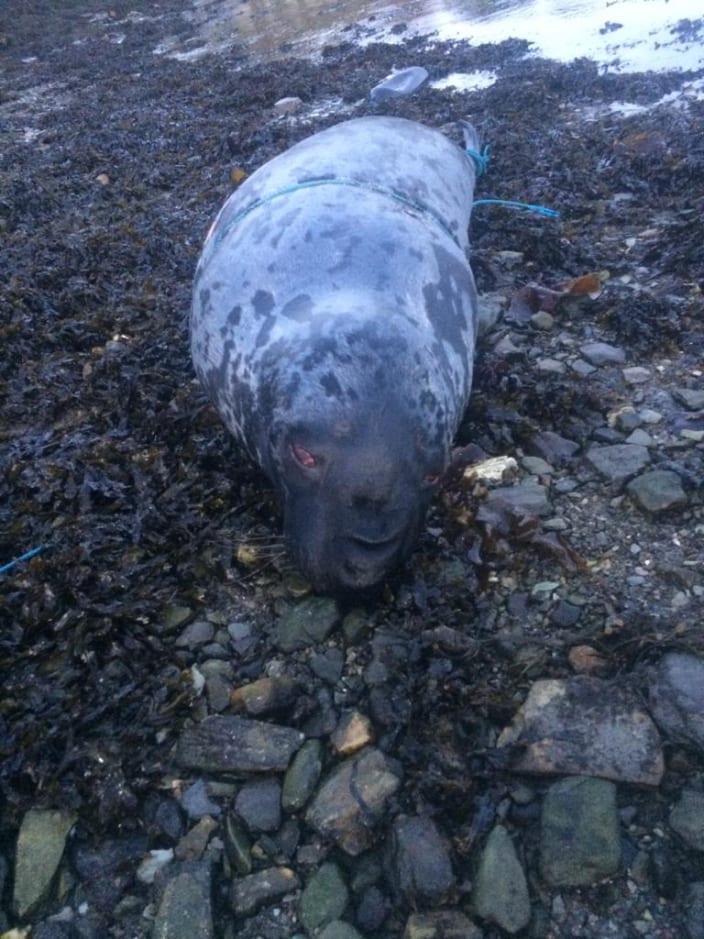 IWDG received a phone call this morning from Helen Tilson, Schull Sea Safari which seems to confirm that the male hooded seal that was alive on Jan 1st at Toormore Bay, has been found this morning dead at Colla Pier, near Schull some 11 km east. The relevant authorities have been contacted and it is hoped that this specimen will be of interest to researchers in UCC and that it can be removed for a necropsy, which might reveal further insights into its journey from higher latitudes.  A predictable outcome under the circumstances.  We wonder what other Arctic wanderers will be reported to IWDG in 2020?

Calm, clear weather on Jan 1st saw lots of people head to the coast for walks and swims to shake off the excesses of the night before, and not surprisingly there was a good spread of sightings; one of which stands out …..a rare hooded seal (for Ireland). 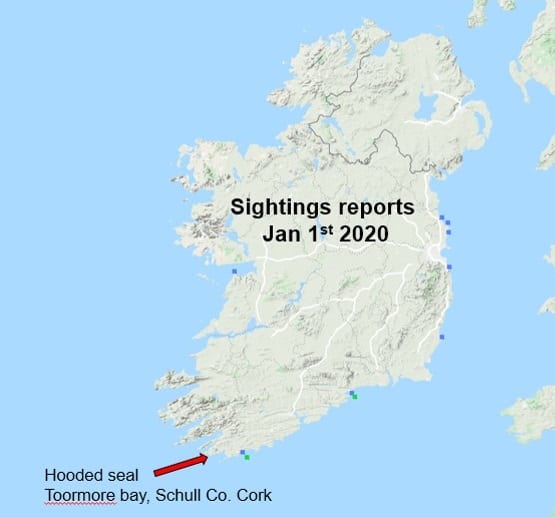 Map of all cetacean sightings reported to IWDG on 1st Jan 2020.

We map all sightings reported to and validated by IWDG for 1st Jan and there was a good spread of harbour porpoises especially along the east coast with sightings off Cahore Pt., Co. Wexford and then Bray Head, Co. Wicklow along with several locations in North Co. Dublin.

Boat and land based sightings confirm that there are still good numbers of short-beaked common dolphins about in the Celtic Sea area. A Cork Whale Watch trip from Reen Pier near Union Hall, Co. Cork produced c200+ common dolphins with a few porpoises, and Andrew Malcolm had dolphins off Helvic Head, Co. Waterford. It does look like common dolphins can be pretty much seen year round along the South coast anyway….given the right weather.

The only west coast record was a single porpoise off Black Head, Co. Clare.  There were no whales reported on the day, but it’s still early days yet, and if recent years are anything to go by, we’d expect further sightings of fin whales in particular off the east Waterford/Dunmore east/Hook Head area. Once the herring have spawned then that’s likely to be it until early spring, when the longer days and increased solar activity kick start the annual phyto-plankton bloom.

The standout record from yesterday Jan 1st, wasn’t however a cetacean species at all, but a pinniped, but not just any seal. Between 16:00-17:00 Helen Tilson of Schull Sea Safari attended to a seal that was up on the mudflats at Toormore Bay, near Schull in West Cork. She reported this to IWDG this morning with images, which were consistent with this being a hooded seal, but the video with audio removed any doubt, as it shows the nasal sac starting to baloon as she approached it, and it made a growling roar, the likes of which I’ve never heard from one of our grey seal bulls.  This is certainly a hooded seal Cystophora cristata. 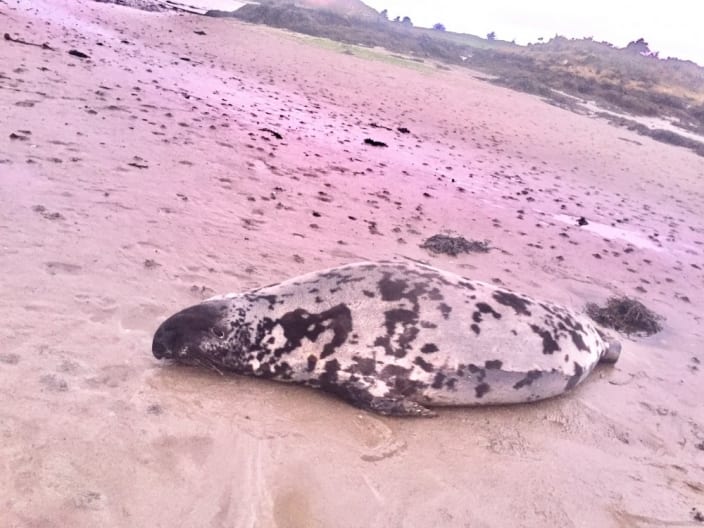 We forwarded these images and video to our colleague Brendan Price of the Irish Seal Sanctuary, who has some previous experience rehabilitating hooded seals and he feels given it’s size that it’s a sub-adult male and that it looks in rather thin condition, which is hardly surprising given that it is so far south of its expected Arctic range.  To the best of our knowledge, this is only the 4th (or perhaps 5th) Irish record of this species and interestingly all previous records have been of pups that came ashore off Curracloe, Co. Wexford (Sept 2001), Sandymount, Co. Dublin and Connamara.

There have been no further sightings of this extra limital vagrant today, and so we obviously hope it has returned to open water, but it’s hard to be optimistic about its chances of returning to it’s rapidly diminishing pack-ice habitat. That said, this species has been recorded as far south as Portugal in recent years, and so we can’t assume it’s trying to head north!  What else is in store for us in 2020?  A hooded seal on day 1 is certainly an interesting start.

IWDG doesn’t solicit records of seals but make exceptions for those rarer species such as hooded and bearded seals and even walrus, which infrequently make landfall on our shores.  If you’ve not decided on your New Year resolutions, then why not consider reporting your sightings of cetaceans to IWDG in 2020 one of them?

Big thanks to Helen Tilson, Schull Sea Safari for reporting this unusual marine mammal record to us today.

Happy New Year to all our recorders