Following the amazing news of sightings of “Spirtle” off the east coast of Ireland, she has been seen of Fenit, Co Kerry regularly over the last month. She was reported on 7th July by James O’Shea off Samphire Island just off Fenit in Tralee Bay, Co. Kerry. IWDG Officer and researcher at the Galway-Mayo Institute of Technology Dr Joanne O’Brien headed out on the IWDG Research Vessel Celtic Mist on 12th July and took fantastic video of Spirtle bowriding Celtic Mist.

“Spirtle” has been recorded on many occasions over the last month together with a small group of 5-6 individuals in the same location off Fenit. Only on 15th August she was seen throwing fish, presumably mackerel, showing she and her group are feeding and in good health. This week on Wednesday more images were obtained by the IWDG off Samphire Island of Spirtle in  a group of 5-6 individuals including a juvenile.

IWDG have been interested to see if “Spirtle” was alone or traveled to Ireland with a group from Scotland. We have been collecting and sending images to Dr Barbara Cheney of the University of Aberdeen research centre at Cromarty and she is “pretty sure that one of the dolphin’s accompanying “Spirtle” is #1160 Fourth (our first fourth generation calf) born in 2013″.

Charlie Phillips, well know photographer based in Cromarty, Scotland recently informed the IWDG ” I can certainly see two of our very well-known animals there, ID#240 “Porridge” (mum of Spirtle) and ID#1126 “Doyle”. This is great news and strongly suggests a small group of related and strongly associated bottlenose dolphins made the journey to Ireland’s east and west coasts. We have documented movements of individual bottlenose dolphins between Ireland and Scotland before, but we do not know how often this occurs or whether it is “typical” behaviour.

Celtic Mist has been working out of Fenit all week and has obtained more images of these and the dolphins in Brandon Bay, which are from the Shannon Dolphin population.  Exciting times off North Kerry. IWDG are running a series of training days in association with Tralee Bay Heritage Association to increase local knowledge and interest in marine wildlife and other aspects of marine heritage (see https://www.facebook.com/tbha2016/?ref=br_rs).

We hope to continue to monitor the presence of this famous “Scottish” dolphin and see if she stays or travels further. Tralee and Brandon Bays have become more important for bottlenose dolphins in recent years. The IWDG published a study in 2016, showing most of these dolphins are from the Shannon  Dolphin population, which is small (c145 individuals) and genetically discrete compared to the “coastal” population of bottlenose dolphins. IWDG proposed that the boundary of the Lower River Shannon SAC, which includes bottlenose dolphins as a qualifying interest, be extended to included these important habitats. IWDG wrote to the Minister of Culture, Heritage and the Galeltacht, but the Dept did not agree with the IWDG.

On May 14th we started getting unusual sighting reports of dolphins off the South Dublin and North Wicklow area, which we were confident were bottlenose dolphins. Although sightings of this species are not common along the east coast, they do occur from time to time.  But there was a consistent feature on many of these reports, which was that one of the dolphins seemed to be very heavily scarred, which initially lead us to ponder whether there could be a Risso’s dolphin travelling with a group of bottlenose. 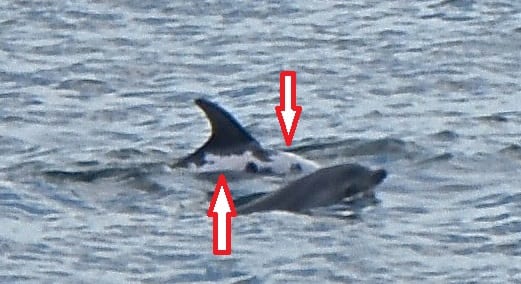 Then the videos and images started coming in and they all showed that no, this was a bottlenose dolphin, but one that was very heavily scarred with brilliant white skin on its right flank.  We showed a few images taken by Cairbre Ó Ciardha from Killiney beach to Dr. Joanne O’ Brien of the IWDG and the Galway-Mayo Institute of Technology, who having only recently returned from the Moray Firth in Scotland, recognised this individual and so she contacted Barbara Cheney from the University of Aberdeen who wrote…..

“This is the bottlenose dolphin known as “Spirtle”, our ID #1143, born in 2012 to a well-known mum here in the Moray Firth, NE Scotland, and confirmed female.  She was found live stranded on the 29th May 2016 late afternoon/evening and refloated on the morning of 30th May.  We saw her with her mum before that on the 23rd May 2016 and then saw her next on the 14th July 2016 with the wound on her right side.  Since then we’ve seen her pretty regularly each summer, the wound gradually healing. We last saw her on the 18th September 2018 (our fieldwork season is May to September).  However, I believe she was seen by a member of the public in the Moray Firth at the start of this year.”

This is a great story of survival for this individual, whose future hung in the balance back in May 2016 when few among the rescue team gave this young dolphin much chance of survival, given the severity of her injuries and severe dehydration.  But she is very much alive and well and reports suggest she’s often seen leading this group of bottlenose dolphins along the South Dublin/North Wicklow coast. 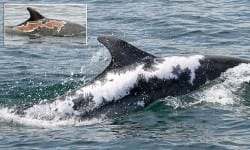 The presence of “Spirtle” who really does stand out when seen from the right side, should make this group very obvious and IWDG would ask any members of the public fortunate enough to see them in the area between Dun Laoghaire and Newcastle, Co. Wicklow, to report any sightings of this small group of 4-8 individuals to www.iwdg.ie.

Any images strong images will be useful in helping us and our Scottish colleagues track their movements and assess Spirtle’s body condition.  It will also be important to determine whether the other group members are from the Scottish Moray Firth resident population of bottlenose dolphins, or if Spirtle has simply teamed up with some Irish bottlenose.

We include the list of known sightings of this group in recent days, and would like to acknowledge everyone below for their sighting reports, videos and images.

This is a great opportunity for Citizen Scientists to help improve our understanding of these wonderful animals, by simply reporting your sightings to us with any images.

See link to full story of her stranding below  http://bigworldtale.com/world-news/new-pictures-reveal-dolphin-survived-extreme-sunburn/