IWDG have just heard of a walrus sighting yesterday Sunday 19th Sept. 2021 in Höfn, Hornafjörður, southeast Iceland and the images suggest that this is likely to be the same walrus aka “Wally” that was last seen in Crookhaven, West Cork on August 30th.  We are awaiting further images that may help us put this matter beyond doubt, but images thus far confirm a similar aged animal based on tusk length, with the reliable pale blemish on its left flipper. Walrus sightings in Icelandic waters are rare and in a month of IWDG circumnaviating the Land of Fire and Ice on RV Celtic Mist in 2018, none were seen, although one was photographed in the Faroe Islands on the return leg to Ireland. If, as we think is likely, this is the same walrus, then this is very good news indeed, as its current location is a mere 300 km from the Arctic Circle, which runs along the very northern tip of Iceland. It will have travelled a distance of between 1,500-1,750 km from SW Ireland to SE Iceland, depending on whether it navigated along the most direct open-water route or remained closer to the shore, travelling up along the Scottish coast and Faroe Islands. Either way it’s an impressive journey back north and the timing and distance involved suggest it travelled 80km a day travel, resulting in an average speed of c3.3 km per hour, which is consistent with the scientific literature.

Our colleague Sean O’ Callaghan who is following up on the story with IWDG contacts in Iceland says that it left Höfn last night and there have been no further sightings of it today, so perhaps it’s already on the last leg back to the Arctic region; although the nearest suitable walrus habitat would be a further 500km to the northwest in Eastern Greenland.

There are lots of unanswered questions surrounding its exact route on this penultimate leg, and it’s surprising there were no confirmed sightings records between Crookhaven and Höfn, as it likely “hauled out” to rest along the Irish West coast or Scotland’s Western Isles, and a few additional dots on maps would increase our confidence as to its likley route back north.  But the fact that it was so well documented over six months, through six countries, covering a distance of upwards of 5,000 km, can only be described as triumph for Citizen Science and a good example of the resilience of wildlife.

We include a list below of all confirmed sightings since it was first reported to IWDG by Alan Houlihan of Valentia Island in mid March. 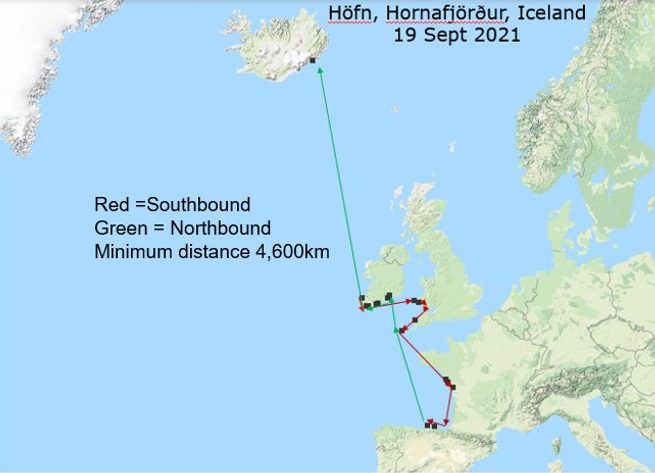 See map of these locations below, Courtesy of IWDG

Whilst not much to report in terms of movements of the Walrus, the last know report to IWDG still has him in the Ardmore Bay area of Co. Waterford as of 5th Aug. Important to remember that he’ll really be most visible to us when hauled out, and so if he moves offshore to forage for the likes of scallops or clams, he can dive up to 10 minutes or longer and may only remain on the surface for a minute recovery time.

So while not much to report on his Irish movements, there is a development on what we’ve learnt in the past few days on his movements after leaving La Rochelle, France on May 29th, as unknown to this author anyway anyway, rather than head back north, it actually tracked South to Spain, where he showed up in the River Nervion, Bilbao some 7 days later on June 4th, a distance of 340 km. This is surely the furthest south a walrus has ever been recorded?  Many of the dates on this timeline below are based on a trawl of web articles and social media posts and so it’s not possible to stand over the veracity of all thesesightings, however we’d love to hear from you if you can offer us any further insights into either locations and/or times.

We attach this map to reflect our current understanding of where he has been and when, since it was first seen on Valentia Island on March 14th……There are certainly quicker ways of getting to Ardmore than going through Bilbao, Spain!

After spending much of the day it seems hauled out on a moored RIB in Ardmore Bay near the Cliff House Hotel, observations by Charles Coughlan suggest it may well be on the move and heading in the direction of Whiting Bay or Youghal.  It seems that his progression anyway is in a westward direction and it’s only a matter of time before it will be in East County Cork.  Again places like Youghal and Ballycotton are busy places in high summer and we’d ask both members of the public watching it from land to give it at least 100 mts distance and boat owners not to approach it at all.  There is no negotiating with an animal of this size if it decides it wants out of the water, as it will rest wherever it so chooses. Although these images have a comic quality to them, there is a serious side to this, as this amimal is a long way from home and we’ve no way of knowing whether it is stressed, and how it may react to stressful situations. So we’d ask everyone who wants to see this rare Arctic visitor to respect its space, as it’s important that we come out the other end of this episode without injury to people or animal……even if we can’t guarantee he won’t sink a few boats! 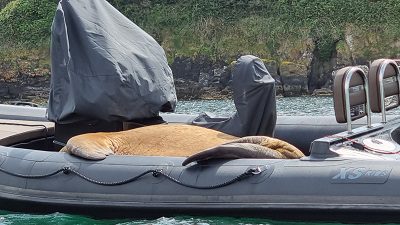 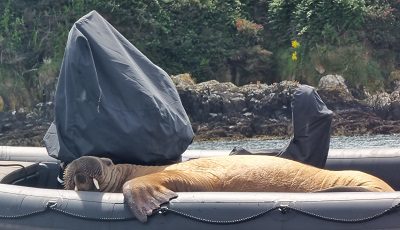 Many of you will recall the wonderful story of the Walrus back on March 14th off Kerry….yes the same one that “fell asleep on the iceberg off Greenland which drifted to Valentia Island”!  Thankfully this rare event was captured by Alan Houlihan, and his images were critical in the telling of this story, which is a story that just won’t go away.  The reports of sightings and re-sightings of this individual thought to be a sub-adult were well documented on this page and indeed on IWDG social media platforms. 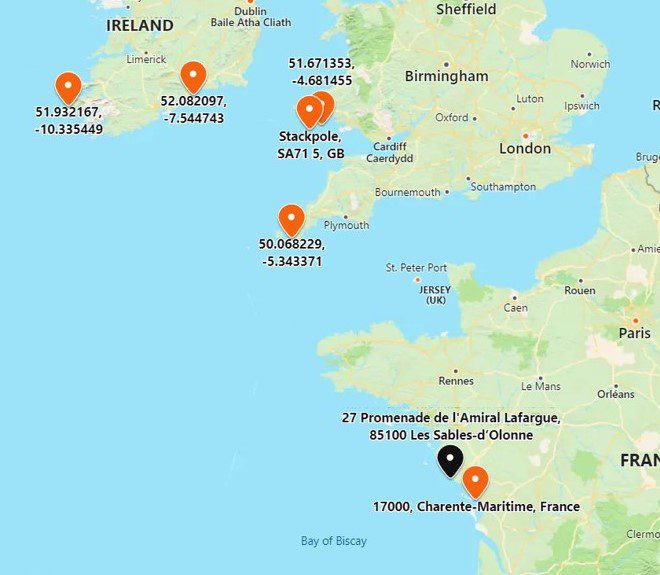 This Arctic vagrant didn’t remain hauled out on Valentia Island for long, as within six days it had travelled over to Broad Haven South beach, Pembrokeshire, Wales and a few days later again it was off Tenby, where it remained for quite some time, making a general nuisance of itself at the RNLI emergency slipway.  By late April it was on the move with sightings off Cornwall, England and by late May it had continued to track south to French Atlantic waters at La Rochelle.  By June we’d heard reports that it was back in UK waters off Scilly and this morning Monday 2nd August IWDG received images that put it off Clonea Strand, Co. Waterford at 11:30am.  Map here shows the known locations of confirmed sightings of this animal, suggesting a minimum distance travelled of C. 2,000 km.

Based on what little we know of the behaviour of this very large pinniped, we think it likely, if it has just made another long distance swim, that it will be tired and may look for a place to haulout to rest.  Walrus spend a huge amount of the weekly activity budget resting. Images thus far suggest that he’s not overly concerned whether it is a quiet, secluded area or a busy port. He is very aware of his size advantage over just about everything and will rest wherever he choses and will not be easily moved.

These images below from Clonea area this morning (02/08/2021) sent to IWDG by Cormac and his account were very interesting indeed. They first of all confirm that it is the same individual photographed off Valentia Island on March 14th 2021, as the white blotches on the elbow of the front left flipper match up nicely (see image 1).  But Cormac’s encounter left him with an impression that the walrus was looking to climb on board his boat, which although humerous and would make for a great viral video, it could also have been a dangerous situation as there was only going to be one outcome.  It would not have been keen on sharing the boat with Cormac.

So this situation may present local wildlife enthusiasts with a great opportunity to observe a rare Arctic vagrant from a safe distance. As always we’d ask local mariners to give this walrus a wide berth and not to disturb it.  There is no way of knowing how long it will remain in the area, if at all, but it has now been tracked over a five month period and through at least four countries and whilst we’d all be happier if he wasn’t here and headed back towards its home within the Arctic circle, it is here now in high summer in waters that must be very warm for a marine mammal with such a thick blubber layer; so let’s not make life any more difficult or stressful for it during its stay.

The latest sighting reports put in the water off Ballinacourty lighthouse for those of you with good optics, perhaps offering a good vantage point.  Enjoy but from a safe distance.

Huge thanks to Cormac Walsh for reporting this encounter to IWDG and we’d ask members of the public to help us track its movement and monitor it by downloading the IWDG reporting app and using it to Report Sightings of this visitor.

Red circle around left flipper of Clonea Walrus confirms it is the same animal off Valentia Isl. on March 14th 2021