WhaleTrack Ireland ​is an exciting IWDG project, which aims to determine what large baleen whales are doing in Irish waters, where are they coming from and going to. This project engages with citizen scientists, described as “​the collection of data relating to the natural world by members of the general public, typically as part of a collaborative project with professional scientists​”. IWDG have been encouraging and working with citizen scientists for decades.

WhaleTrack Ireland was funded by Ryanair in 2019, through the company’s Carbon Offset Program which was supported by voluntary donations made by Ryanair customers. This enabled IWDG to purchase new equipment including cameras, soundtraps and drones. 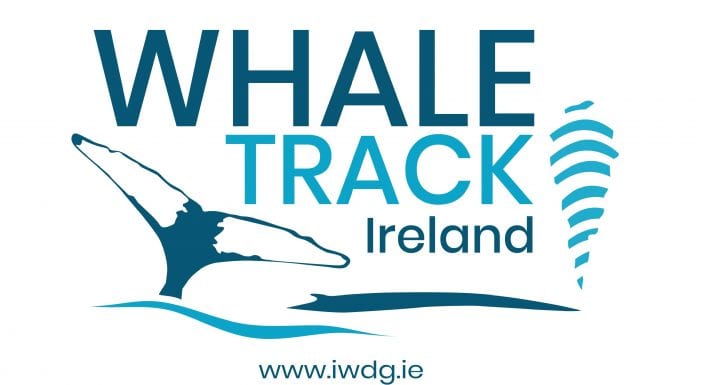 The IWDG aims to learn more about the large whales that annually visit our shores to feed. Humpback and fin whales are typically seen from land along the southwest and south coasts from Clare to Waterford and (where possible) attempts will be made to reach these animals by boat to obtain images suitable for photo-id.

Along with continuing the groups photo-identification projects and measuring whales total length and body condition using a drone.

WhaleTrack Ireland began in 1999 when Eoin O’Mahony sent video of two humpbacks off the Kinsale Gas Rigs to the IWDG. Since then we have documented over 100 individual humpback and 60 individual fin whales in inshore Irish waters.

The humpback whale is the most iconic of all whales.  Their populations were once depleted worldwide through commercial whaling but they are now slowly recovering. In 1999 the Irish Whale and Dolphin Group started to catalogue photographed humpback whales.

Since then 92 individuals have been recorded mainly off Counties Cork and Kerry but there are records now from all around the Irish coastline. They travel here to feed on shoaling fish but some “Irish” whales have been recorded in Iceland, Norway, the Netherlands and Gibraltar but the breeding grounds for these “Irish” whales remains a mystery. The time humpbacks return to Irish waters has changed in recent years from late Autumn to Spring and we do not know whether our waters are their final destination or just a stop off point. Clearly we still have a lot to learn about these giants which WhaleTrack Ireland aims to answer. You can support our research by Adopting a Whale here:

Citizen Science at its best

WhaleTrack Ireland is a Citizen Science which has been running for over 20 years. At the beginning a number of Wildlife Grants from the Heritage Council established the project. In 2019 the IWDG received funding from Ryanair through the company’s Carbon Offset Program, which is supported by voluntary donations made by Ryanair customers during the booking process. This enabled the IWDG to invest in equipment such as drones, Soundtraps and increase our dedicated fieldwork.