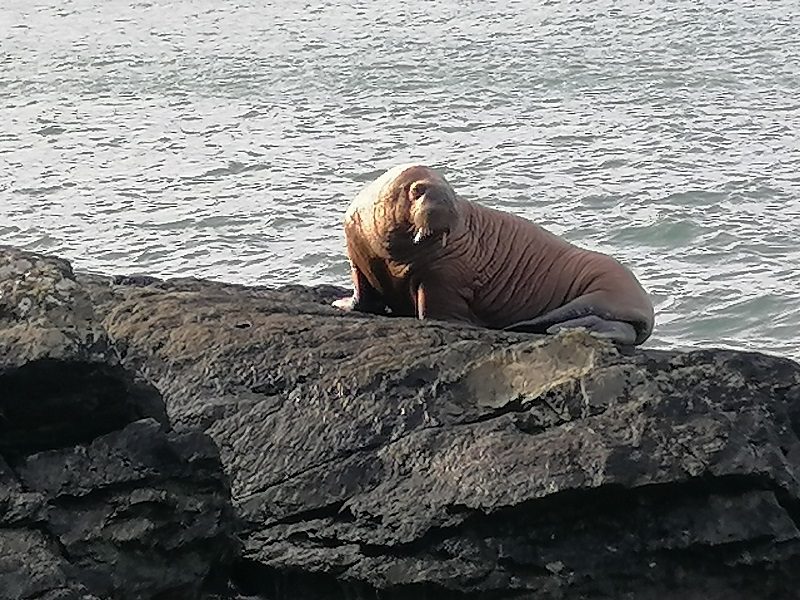 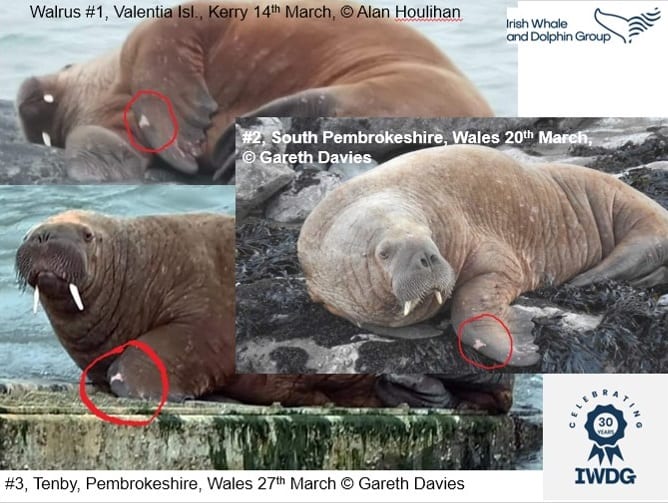 We’ve just learnt over the weekend that the walrus has been observed in Tenby Bay area which is some 19 kms east of its first confirmed Welsh sighting off Broad Haven, South Pembrokeshire on March 20th. Images taken by Gareth Davies and others again confirm that this is the same individual that was recorded on March 14th off Valentia Island, Co. Kerry, SW Ireland, making this is the third location that it has been recorded in a 13 day period; which is a minimum distance of 450km/285 miles.

Again, even though it is entirely possible that it is lost, it does appear to be in reasonable condition and our advise as always is to give this large pinniped the space it needs, so that it can forage and navigate unimpeded. We attach a composite graphic which confirm this latest match and a map which shows its likely route. 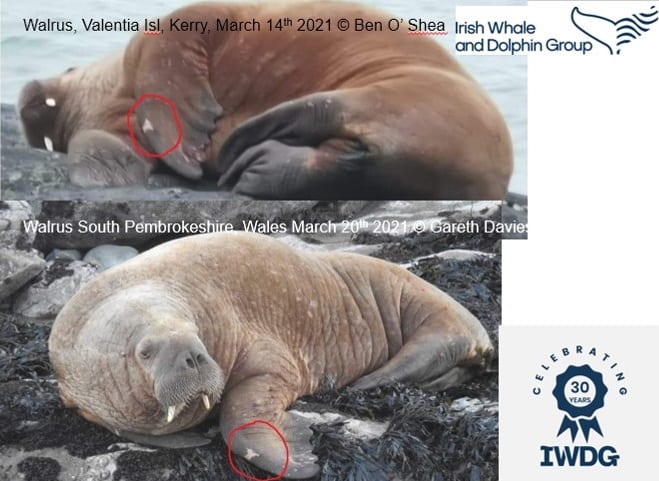 Late on Satuday 20th March we received images on social media of a walrus off South Pembrokeshire, Wales. Initial images  were pretty conclusive that this was the same animal reported to IWDG six days previously on Sunday 14th March off Valentia Island, Co. Kerry, SW Ireland. The tusk length 8-9 cm and the same white markings on the left flipper stood out (see left), and the latest batch of images from Gareth Davies put this matter beyond doubt and confirm that over the past 6 days this individual has travelled east a minimum distance of 270 miles or 430 km between SW Ireland and South Wales.

So it seems that this individual was neither as undernourished nor and as exhausted as some earlier commentary suggested. This is an impressive passage over such a relatively short period, but is well within the capabilities of these large marine mammals who can maintain average swim speeds of 4 MPH. Despite their bulky frame and glumsy appearance on land, walrus are surprisingly strong and agile swimmers capable of long ocean swims.  We hope to keep you updated on this intriguing story as it evolves. This composite image from both the Kerry and Welsh encounters highlights the main marking which confirms the match and maps the most likely route taken between the two sites (image below). 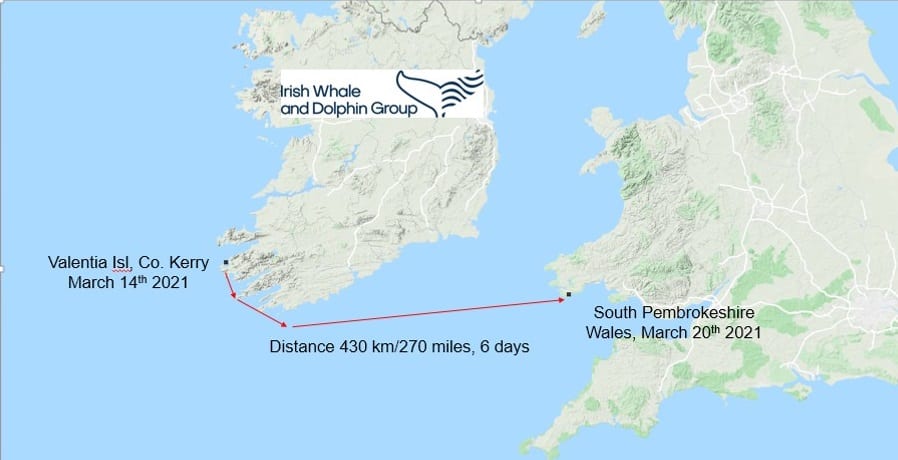 We’ll keep you posted here on www.iwdg.ie with any relevant updates on this fascinating story…..see below for the full story.

This story really seems to have captured the public’s imagination in a huge way and IWDG have fielded media enquiries from as far afield as Canada, Poland and the Ukraine, all wanting to know more about the Kerry walrus. It was also covered nicely on the main RTE News last night March 15th. The articles, images and videos put up on IWDG social media as of this morning has had a staggering reach of almost 300,000.

As we’ve come to expect from such stories that are largely driven by social media, there has been fair amount of commentary that is simply wild speculation; and the unfortunate thing is that once a claim is made by somebody who is invariably an “expert” or has an informed opinion, then it tends to stick and be repeated ad nauseum.  If we’ve heard once about this animal falling asleep on an iceberg off Greenland, we’ve heard it 100 times, and then there is the claim that this is first confirmed Irish walrus sight

ing, which even a cursory fact check will show to be incorrect (see below).

So when talking to the media there is an onus on us to chose our words carefully, as let’s face it, none of us are walrus “experts”, in fact pretty much anything we know about this species we’ve learnt out of books since Sunday afternoon! And so we seek more informed opinions from colleagues overseas who do have expertise, and the first thing we needed to investigate was whether the Kerry and the Danish specimens were one of the same. To this effect we shared all high resolution images with Morten Tange Olsen, Associate Professor, University of Copenhagen, Denmark and he has ruled out this possibility based on “our animal not having the same wounds/scars on the lower left side of the body”. His opinion was supported by Eric W Born, Senior scientist and Consultant to the Greenland Institute of Natural Resources in Denmark who writes: “the external tusk length (portion seen below upper lip) on the Valentia walrus is 8-9 cm – and therefore somewhat longer that in the Vorupør specimen in Denmark.”

With this matter put to rest, we needed to get an informed opinion as to what sort of condition the experts felt the Kerry walrus was in?  This is important, as of course there were the calls from a significant number of the public to somehow intervene and save the walrus based on their opinions that it was either starving or exhausted, or both.  I’ve never seen a walrus before, not even on the IWDG’s 2018 humpback whale expedition, which skirted along the edge of the Arctic circle on our circumnavigation of Iceland, and so my opinion on this, or that of my colleagues counts for little, and so again we look to the experts.

Eric Born’s thoughts were …. “walruses feed intensively when at sea and as a part of their normal behavior they must haul out on land (or ice) for 25-35% of the time. When they haul out to rest they may appear very slow and drowsy which makes inexperienced observers sometime believe that they are sick. Unfortunately that has sometimes led authorities to “mercy kill” European stragglers although photos indicated to me that they were in good body condition – as so is the Valentia walrus.  To me it looks as a sub-adult in OK body condition”

Ok, so we now know that this walrus is not an isolated occurrence, as others are also venturing to lower latitudes; and according to walrus researchers it seems to be in reasonable condition. Our final question is …..what next for it?  I’ve always been under the impression that these Arctic pinniped vagrants probably never successfully return to their pack ice habitat……was this in fact the case or just more mis-information?  So I put this question to Morten, whose reply was pretty clear…  “I do not think it would be a problem for it to find its way back home again.”  The fact that there were no further sightings of the walrus in the past 48 hours, gives us hope that its long track north may have already began.

So for anyone concerned for the welfare of this animal, perhaps we need to have a little more faith in the resilience of wildlife. That’s not to say that IWDG is not concerned about the recent increase in sightings of Arctic species such as: beluga and bowhead whales (July 2015 & May 2016), hooded and bearded seals and another walrus.  We live in very interesting and slightly worrying times, which is what makes the IWDG reporting schemes even more relevant for monitoring just how rapidly our seas and their inhabitants are changing.

Please feel free to share this article on your own platforms, but we’d ask you to acknowledge IWDG as source.

If you’d like to support the IWDG’s conservation work (Charity # CHY11163) please consider becoming a member and getting actively involved in our work.

The Irish Whale and Dolphin Group (IWDG) received a sighting report of a walrus Odobenus rosmarus from Alan Houlihan at 16:27 on Sunday 14th March 2021 from west of Knightstown, Valentia Island, Co. Kerry. Video footage circulated on social media around the same ti

me confirmed species identification….this was clearly a rare sighting of a walrus, an extra-limital Arctic vagrant to Irish waters.

Given the size of this specimen, which Alan estimates was at least 2m, and the presence of tusks, we can say with some confidence that it was a young sub-adult specimen.  However it’s not possible to determine gender as both males and females have tusks and without a clear view of the genital area sexing walrus is notoriously difficult

This is only the third walrus record validated by IWDG in the past 30 years, although there are very likely other records that have gone unreported to IWDG, whose focus is on cetaceans (whales, dolphins and porpoises). The National Biodiversity Data Centre which compiles all animal and plant records in Ireland has eleven walrus records, while the Natural History Museum in Dublin suggest this number may be as high as twenty going back over the centuries. Either way Irish walrus sightings are very rare and it’s important that their occurrences are detected and reported to established all Irish recording schemes.

Previous walrus sightings validated by IWDG are from 3rd April 1999, near Old Head, Clew Bay, Co. Mayo and Oct. 5th 2004 from Mulranny also in Clew Bay. In mid-February 2021 a walrus was photographed off northwest Jutland on the Danish coast and comparison of images may confirm whether they may be the same individual.

We would ask members of the public fortunate enough to see it, to observe this wayward traveler from a safe distance and to give it the space it requires. IWDG would ask that any further sightings be reported to www.iwdg.ie for validation.

Huge thanks to Alan Houlihan and Ben O’ Shea for reporting your observation to IWDG and sharing images and footage of this memorable encounter.